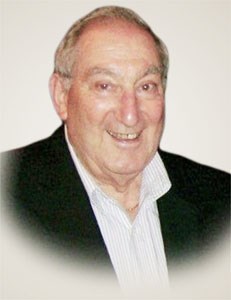 He was predeceased by his parents, Frank and Jenny, as well as brothers Edward, Felix (in infancy) and Philip.

Born April 2, 1930 to Frank and Jenny Colosimo, Archie was a lifelong resident of Thunder Bay. He worked in the family grocery and dry-cleaning businesses. As a young man, Archie and his brothers built and raced stock cars at the CLE grounds, and helped organize the races. He maintained a lifelong interest in racing and attended the Australian Grand Prix in 2006.

Family was always an important and integral part of Archie's life. Archie and Diane met at the St. Andrew's Young Peoples Club, and married in 1956. They built a house on Richard Street to accommodate their growing family and later built a camp at Mackenzie Beach. They continued to enjoy cooking and entertaining at gatherings for family and friends at both locations, throughout their lives. His specialty of spaghetti and meatballs was always a hit. Archie loved to spend time socializing and playing bridge with their good friends - too numerous to list here, but you all know who you are! There was always a meal and a bed at the Colosimo house or camp; nobody was ever turned away or left hungry.

Archie dedicated his life to his community, and selflessly gave his time and energy for the benefit of others. In his 30s he went back to school to study social work. Archie was a lifelong advocate for young people from his days as a minor hockey and baseball coach to his work with the students at Lakehead University and Youth Employment Services.

He worked for the Thunder Bay District Catholic School Board as an attendance counsellor and was an elected Trustee for the Lakehead District School Board for many years. After his retirement, Archie was the Ombudsman at Lakehead University, a job that combined his twin passions of helping others, and promoting education. Archie worked as Ombudsman until his 80th year. He was dedicated to the education of youth, and he took great pride in his work for Creighton Youth Services and as board member for YES Youth Employment Services, developing many programs for this organization.

Archie received The 2016 Spirit of Thunder Bay Award in recognition of the great improvement and enrichment his volunteer work has made to the community of Thunder Bay.

Archie's involvement with the Victorian Order of Nurses (VON) spans more than 50 years. He led the former VON Thunder Bay branch board and later chaired the Community Corporation. He helped grow VON Thunder Bay from one program with two nurses, to an organization with innumerable programs and more than 150 nurses. His involvement over the years encompassed local, provincial and national roles, including serving as president of the former VON Ontario. In 2018, Archie received the VON Canada Award of Distinction in recognition of his years of leadership and service.

The family would like to thank the VON personal support workers, the doctors and staff at the Thunder Bay Regional Heath Sciences Centre, St. Joseph's Care Group and Pinewood Court for their care and support.

Funeral Services for Armand will be held in the Chapel of Harbourview Funeral Centre on Friday, October 1, 2021 presided by Msgr. P.M. Stilla V.G. at 11:00 a.m. Visitation for family and friends will begin an hour prior to the service. Due to current gathering restrictions, space is limited. Please call the funeral home at 346-9880 if you wish to attend the Funeral Service.

As was the Colosimo custom throughout Archie's life, everyone will be welcomed with open arms at the reception to follow.

For those unable to attend in person, the service will be streamed live and then archived at www.harbourviewfuneral.ca where condolences may be offered as well.

As directed by the Province of Ontario and the Bereavement Authority of Ontario, a record of attendance must be maintained. Wearing of masks or face coverings by everyone and maintaining social distancing of 6 feet is mandatory for those attending the visitation and services.

In lieu of flowers, memorial donations would be appreciated to the VON Thunder Bay Colosimo Education Fund by calling (807) 344-0012, or to a charity of your choice.

Published by The Thunder Bay Chronicle Journal on Sep. 25, 2021.
To plant trees in memory, please visit the Sympathy Store.
MEMORIAL EVENTS
Oct
1
Visitation
10:00a.m.
ON
Oct
1
Funeral service
11:00a.m.
Harbourview Funeral Centre
499 N. Cumberland St., Thunder Bay, ON
Funeral services provided by:
Harbourview Funeral Centre
MAKE A DONATION
MEMORIES & CONDOLENCES
Sponsored by Harbourview Funeral Centre.
5 Entries
Uncle Archie was the best. He taught me a meatball recipe that I have never seen rivalled. The secret, he always said, was in the salty Romano cheese. Anyway, the guy was just like having a children's show host as an uncle. He was so great. I will always think of him. - PJHK
Patrick K
Family
October 8, 2021
One of the group of men who in the 50's got together to form the Current River Little League and coached the Major Red Sox. Kept many boys busy and out of trouble for many summers. RIP
Al Nalezyty
Neighbor
September 30, 2021
A sweet, kind and generous man, and a great sense of humour - always had a funny story to share or a quirky nickname for you! He will be missed.
Katherine Romaniuk
Friend
September 26, 2021
A fine man, a good friend, a community leader and a great cook! Armand was a friend to so many. He loved his family and they will miss him dearly as will so many people in Thunder Bay.
Joan Baril
Friend
September 26, 2021
I knew Archie years back when I too worked for the Catholic School Board. He was both caring and practical. He could see through the tricks kids and parents played to avoid regular school attendance and in response could be either sympathetic, scary or both at the same time!