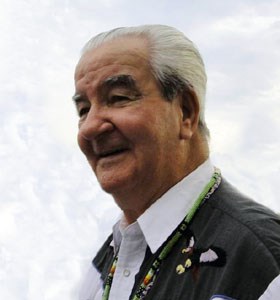 On Monday, January 8, 2018 Robert Charles McKay (Senator Bob), chose to pass his life on to the Creator. His loving wife was by his side assisting him in his journey.

He met his life time partner, Gloria, in 1963 and they married in February 1964 and had 3 daughters. In 2014 he was struck down by ALS and was unable to carry on doing the community work he so enjoyed. Born in Port Arthur in 1938 to George and Edna McKay, he grew up in the Thunder Bay area. His family were commercial fishers and lighthouse keepers and he learned at an early age how to operate a commercial fishery. During his life he worked in the bush camps, construction industry (40 year member of the Operating Engineers Union), lighthouse keeping and commercial fishing. In 1965 he purchased a commercial fishing license on Sturgeon Lake.

Around 1995, he began exploring his heritage and found that his ancestors were involved in the fur trade and there were Aboriginal roots. It was then that he joined the Metis Nation of Ontario and became involved. Around 2000 he was asked to become the Senator for the Thunder Bay area Metis. After retiring from the construction trade, he became busier than when he worked. He was the only Senator for the Metis Nation in this area.

With the inception of the City of Thunder Aboriginal Advisory Committee, he became involved in helping to form and organize this committee which is an integral part of the City's Aboriginal Initiatives. He was also involved in several other committees with the Board of Education, Lakehead University and Northern Ontario Medical School. As a member of the Metis Nation, he was called to sit on other committees and consultations locally, provincially and federally. For this work he was awarded the Queen's Jubilee Medal in August 2012 in Sault Ste. Marie during the Annual Meeting of the Metis Nation of Ontario as well as the Suzanne Rochon Burnett Volunteer of the Year Award from the Metis Nation of Ontario in 2014. In 2014 he was also awarded from the Ontario Public School Board's Association a Certificate of Appreciation for volunteering in the schools and the Award of Excellence for outstanding contribution to the education community (2014); Northern Ontario School of Medicine Appreciation for generous contributions to the Medical School as well a being honoured with the gift of an Eagle Feather and his aboriginal name "Waa baa binise inini" in 2016. He felt that this was the most rewarding time of his life. Bob was a founding member of the Canadian Lake Superior Lighthouses who are restoring some of the Lighthouses along the shore of Lake Superior. He was great supporter of preserving the past and had many stories which he has shared with different groups within the area.

Bob is survived by his wife Gloria and his three daughters, Maureen (Jim) (Sudbury), Diana (Thunder Bay) and Suzi (Texas) as well as his granddaughter Michelle (Kris) (Thunder Bay). He is also survived by his sisters Christina Egeland and Carol Autio of British Columbia and many nieces, nephews and cousins. He was predeceased by his brother George (Dec. 2017) and Margaret (2016) and his mother and father.

A Celebration of Life will be held on February 24, 2018. Details will be posted later regarding time and location.

In lieu of flowers, donations may be made to Lakehead University Achievement Fund, Northern Ontario Medical School, ALS Canada or Canadian Lighthouses of Lake Superior or a charity of your choice will be appreciated.

Published by The Thunder Bay Chronicle Journal on Jan. 13, 2018.
To plant trees in memory, please visit the Sympathy Store.
MEMORIAL EVENTS
To offer your sympathy during this difficult time, you can now have memorial trees planted in a National Forest in memory of your loved one.
MEMORIES & CONDOLENCES
1 Entry
Mr. Bob McKay, an old neighbor of mine, was a delightful man. Always smiling, and kind to his family and his dog Scrappy Friends and neighbors. My condolences - he will be sadly missed