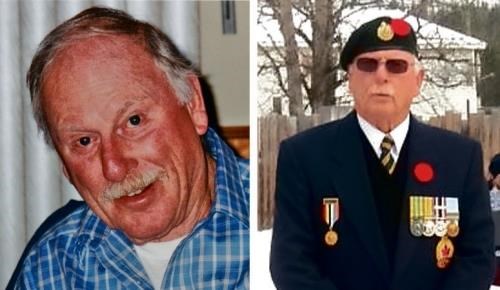 BORN
1931
DIED
2021
FUNERAL HOME
Delta Funeral Home & Cremation Centre - Delta
5329 Ladner Trunk Rd.
Delta, BC
COOPER, Alan John January 7, 1931 - July 24, 2021 On Saturday, July 24, 2021, Alan John Cooper, succumbed to pneumonia after many years of living with dementia and Alzheimer's disease. Alan is survived by his wife of 58 years, June; daughters Pam (Russ) Aldrich, Colleen McCann, Kelly Cooper and Leslie (Doug Watson) Varga; grandchildren, Toni, Shanalee, Ben, Chloe, Lane and Mary; great-grandson Riley; and dear sister Pat Clutchey. Alan was predeceased by parents John (Spud) Cooper and Ellen Cooper, step-mother Winifred Cooper, brother-in-law Ed Clutchey, son-in-law Gord Farrow, son-in-law Fred Walcott, and grandson Fred Walcott Jr. Alan grew up in White Rock, BC, and left high school early to work in the woods, logging, on Vancouver Island. He spoke fondly of his days on Cowichan Lake and Cayacuse, and the Gilchrist family who treated him like their own son. He joined the Canadian Armed Forces four days after his 18th birthday in 1949, and would continue to serve until 1957, being stationed in Germany and then Japan. He was a veteran of the Korean War, and a very proud member of the Korean Veteran's Association of Canada, and Richmond Unit #47 while still living in Tsawwassen. Many thought Alan would remain a perpetual bachelor, but when he met the love of his life, June Westaway, he was hooked. His work in construction throughout BC would take the newlyweds first to Terrace, then Prince George, and finally found them in Tsawwassen in 1971 where they stayed for 27 years. Alan made a name for himself in the BC construction industry working for Ben Ghinter Construction in Prince George, Hemlock Valley Construction in North Vancouver, living and working in camp on the construction of Tumbler Ridge in the early 80's, and working as Purchasing Agent for Progressive Contracting in Richmond. He found his place with Progressive Contracting arriving early to the office, with his radio abuzz all day from men in the field needing supplies. Everyone knew they could count on 'Al' to get them what they needed. He worked for Progressive until his retirement in 1998. In retirement, Alan and June followed family to the Cariboo, where they lived in Bridge Lake, McLeese Lake, and finally Forest Grove near 100 Mile House. The snow was deep in the winter, but summers were dry and perfect for him to drive his prized '78 Camaro. Unfortunately, Alan was diagnosed with dementia which progressed and he entered long-term care at Fischer Place/Mill Site Lodge in February of 2020. The pandemic cut him off from family for many months, but thankfully June was able to start visiting again. The forest fire threat to 100 Mile House forced the evacuation of Alan's care home and he ended up in Salmon Arm, where he developed pneumonia and was placed on palliative care. The family would like to thank the '100 Mile nurses', who were evacuated with their residents, for their loving care of Alan in his last days. They would also like to send a heartfelt thank you to the hospice volunteer, Jen, who sat with Alan all night until he passed. Your care and kindness will never be forgotten. We will miss you and love you always Alan, Dad, Grandpa, Papa, 'Red', 'Coop'. "Good night! good night! as we so oft have said Beneath this roof at midnight in the days That are no more, and shall no more return. Thou hast but taken thy lamp and gone to bed; I stay a little longer, as one stays To cover up the embers that still burn." - Henry Wadsworth Longfellow A family celebration of life will be held at a future date, once we are all together again. In lieu of flowers, a donation to the Royal Canadian Legion Poppy Trust Fund would be appreciated. Online condolences can be made at deltafuneral.ca Delta Funeral Home 604.946.6040

Published by Delta Optimist from Sep. 23 to Oct. 23, 2021.
To plant trees in memory, please visit the Sympathy Store.
MEMORIAL EVENTS
To offer your sympathy during this difficult time, you can now have memorial trees planted in a National Forest in memory of your loved one.
Funeral services provided by:
Delta Funeral Home & Cremation Centre - Delta
MEMORIES & CONDOLENCES
0 Entries
Be the first to post a memory or condolences.