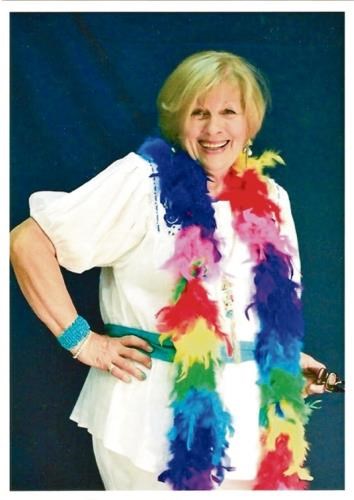 BORN
1945
DIED
2021
HENRY, Doreen (nee Rempel) June 14, 1945 - October 3, 2021 Doreen Helen Henry, aged 76, of Halfmoon Bay, passed away on October 3, 2021, with her beloved family by her side. She was born to the late Cornelius and Mary Rempel on June 14, 1945, in Chilliwack, BC, where she grew up together with her brother Bob and two sisters, Lois and Jeanette. She is predeceased by her brother, whose ashes were shot out of a potato gun over his neighbouring vineyard in Oliver. Doreen graduated from the Faculty of Education at UBC and became a teacher. Doreen was married to Merv Henry on July 9, 1966, in Chilliwack BC. They moved to Toronto, and after having two sons (Mike and Justin) soon relocated to Denver. In 1977 they made their way back to BC: North Vancouver. You may remember "Mrs. Henry" if you went to elementary school on the North Shore, where she received great praise during parent-teacher interviews. Decades after retirement she would still correct her children's grammar: in fact, she never stopped. You may have known Doreen from the curling rink at the NSWC or from her time as a "hockey mom". She formed life-long friendships with the hockey parents with whom she bonded, and created an abundance of memories. In the off season, she loved camping with her family throughout BC, particularly at Mahood lake. There she found contentment sitting by the campfire and reading her book, sometimes just looking out over the lake. Occasionally she did get out on the lake which generated some fantastic fish stories; like the time that her dog Benji got up with all four feet on the 1" trim of the boat to check out the excitement over the fish she was bringing in. She had to choose between pulling the dog back in the boat or keeping her fish on the line. The dog went swimming. Upon retirement, Doreen and Merv moved to Halfmoon Bay on the Sunshine Coast. There Doreen was an active and often boisterous member of the community. She loved music and sang with the Pender Harbor choir and SASS. You could also sometimes catch her singing at home or in the car, or at the Lions games. Doreen was driven to help people. For many years she was organizing fundraisers for Habitat for Humanity, the Salmon Enhancement Society, and other charitable causes. She has been a member of multiple book clubs and always had several books on the go which you could find beside each of her favorite chairs, in her car, and in her handbag. Over the years Doreen accumulated many miles and memories traveling with Merv, as well as family and friends, around the world. She also accumulated many, often bizarre, earrings. You may have joined her on a trip somewhere across Canada, or anywhere in North America, Central America, South America, Europe, Africa, Oceania, or Asia. Camping trips down the coast to Mexico with Merv and their beloved dog Finn occurred annually until their encounter with the banditos. They also carried out in-depth genealogy searches including trips to Ukraine and Ireland. Back at home, Doreen cherished welcoming guests for dinner, bridge, or just a visit. There would always be an appy waiting on the coffee table when you got there. Doreen is survived by her loving husband Merv, her sisters Jeanette and Lois, her sons and daughters in law Mike and Elaine, Justin and Hanne, and her grandchildren, whom she loved more than anything, Mattias, Keelin, and Connor. Her last words were "remember the potato gun". Hope their aint no grammer misteaks mum. Please check www.mckenziefuneralservice.com for details on the memorial service which will be announced shortly.

Published by North Shore News from Oct. 20 to Nov. 19, 2021.
To plant trees in memory, please visit the Sympathy Store.
MEMORIAL EVENTS
To offer your sympathy during this difficult time, you can now have memorial trees planted in a National Forest in memory of your loved one.
MEMORIES & CONDOLENCES
5 Entries
We are so sad to hear of Doreen's passing. Our heartfelt condolences to Merv and the family. Doreen was such a lovely person and always talked about Merv, her children and grandchildren with great pride and love! Treasure the memories. She will be greatly missed. We are thinking of you at this difficult time.

With deepest sympathies,
Lee-Ann and Dave Blair
Lee-Ann and Dave Blair
Neighbor
November 4, 2021
I so Loved singing next to Doreen in the Alto section of the Pender Harbour Choir. We both Loved particularly "The Clouds" by Bill Douglas, which I will Always connect to my time singing next to Doreen.
I only knew Doreen for the one year on the Sunshine Coast, yet she ist embedded in my Heart with her warm and caring energy, and her heartfelt laughter. I will miss you, Doreen, and thank you from the bottom of my Heart for the Impact you have made in my Life, and that of many Others.
May you rest in piece, with all my Heart,
Brita
Brita
Friend
October 21, 2021
A lovely remembrance of a lovely and lively and giving woman. She will be greatly missed by our whole family. She was especially beloved by my Mom, Gwen, and added so much to Mom’s enjoyment of life.
Cathryn Aune
Friend
October 17, 2021
So sad at Doreen's passing Great Lady, My thoughts are with her Family Condeleces
lesley mvshane mitchell
Friend
October 15, 2021
Enjoyed her travel stories, particularly her Russia/Ukraine stories, as we shared the same ancestry! My condolences Merv...
Merle Gerbrandt
October 15, 2021
Showing 1 - 5 of 5 results