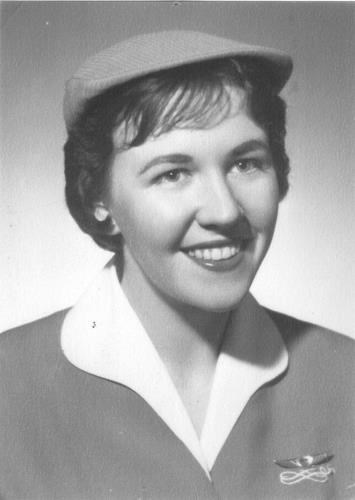 Selma came to Canada with her parents, German Lutherans Andreas and Ottilia Geng. Upon arrival, the family was reunited with her brothers and sisters who settled in Canada earlier.
Selma was the youngest of seven siblings, Victor, Eugene, Herbert, Konstantin, Teresa, Adine, and Lenchen.

When Selma was in her twenties, she worked for United Airlines as a stewardess.

Selma married Walter F. Kupka and had two children, Ursula and Walter Jr. Selma raised her two children on her own and worked at Woodward's food floors until she retired.

She loved her family and friends. Gardening was her favourite hobby. Selma was one of the most solid ladies you could meet, altruistic, smart, honest and kind. She also had a great sense of humour. Selma made people feel great and put a smile on everyone's face.

Selma is survived by her children, Walter Jr. and Ursula; and her grandchildren, Alexandra and Emma.

Selma will be greatly missed by her family and friends.

A service will be held on Thursday, October 7, at 11 PM, at the Delta Funeral Home & Cremation Center, 5329 Ladner Trunk Road, Delta, BC.
Published by North Shore News from Oct. 21 to Nov. 20, 2021.
To plant trees in memory, please visit the Sympathy Store.
MEMORIAL EVENTS
To offer your sympathy during this difficult time, you can now have memorial trees planted in a National Forest in memory of your loved one.
Funeral services provided by:
Delta Funeral Home & Cremation Centre - Delta
MAKE A DONATION
MEMORIES & CONDOLENCES
0 Entries
Be the first to post a memory or condolences.