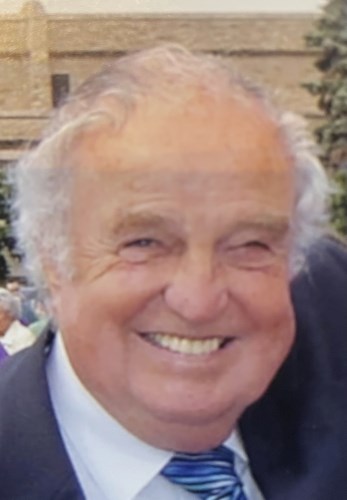 Ron was born in Beeton, Ontario on April 13th, 1927. In 1948, he was summoned from his studies at Waterloo College, back to Barrie, to assist in his father's wholesale business following the death of his father's business partner. Ron subsequently built Stewart Wholesale Company Limited into a well-known and successful enterprise with five locations - a business he sold in 1997, which still bears his name. In 1977, Ron returned to Wilfred Laurier University and earned his degree in political science at age 50.

A proud Canadian, passionate about serving his country, Ron was elected Progressive Conservative Member of Parliament for Simcoe South in 1979. He was re-elected with landslide victories in 1980 and 1984 and served in various Parliamentary Secretary roles. He was an outspoken defender of small business, freedom of speech, less government, and linguistic fairness. He was proud of his Private Members Bill to make "O 'Canada" our official National Anthem, and his instrumental role in bringing Honda and Volkswagen Auto Plants, and the Mariposa School of Skating to his riding.

He was a life-long and devoted member of the Masonic order (Master of Kerr Lodge 1961), and became Potentate of Rameses Shrine Club in 1978 with some 6000 members. He was also Director of the Royal Order of Jesters.

Ron loved golf, cottage life on 12 Mile Bay, dogs and travelling - visiting upwards of 100 countries. He celebrated life with meaning, humour, kindness and boundless energy and enthusiasm. A gifted orator, he also delighted in reciting his much-loved poet Robert Service. He reminisced about sailing the Great Lakes as a young hand on "the boats" and expressed pride in his service as second Lieutenant in the Canadian Officers Training Corp in Base Borden. In short, he lived the life of 10 men.

He will be sadly missed by all who were fortunate enough to know him - especially his wonderful wife "Emmie" of 72 years.

The Stewart family would like to express warm and heartfelt thanks for the compassionate care and guidance received from Dr. Alex Dickson and nurse Colleen Wormsley, as well as all Personal Support Workers from Bayshore Healthcare. Also, endless gratitude to Delaila Kishi for her selfless and ongoing love, care, and kindness.
Visitation will take place at the Steckley-Gooderham Funeral Home, 30 Worsley St., Barrie on Monday, January 31th, 2022 from 6 - 8 p.m. Funeral Service will occur the following day on Tuesday, February 1st, 2022 at the Trinity Anglican Church, 24 Collier St., Barrie at 2 p.m. Private family interment in the Spring at the Barrie Union Cemetery. Online condolences may be left at www.steckleygooderham.com

Published by Simcoe County News on Jan. 15, 2022.
To plant trees in memory, please visit the Sympathy Store.
MEMORIAL EVENTS
To offer your sympathy during this difficult time, you can now have memorial trees planted in a National Forest in memory of your loved one.
Funeral services provided by:
Steckley-Gooderham Funeral Home Worsley Street Chapel
MEMORIES & CONDOLENCES
1 Entry
Please accept my sincere sympathy Ron helped us young MP´s adjust to life in Ottawa in so many ways. I was so pleased when he asked me to join him at his golf/dinner fundraiser....stayed at Sammy´s hotel and treated like royalty... Luv that man, Roger Clinch
Roger Clinch
Friend
January 15, 2022
Showing 1 - 1 of 1 results