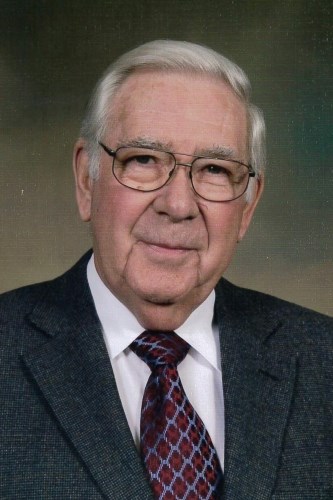 It is with deep sadness that we announce the peaceful passing of Peter Biesheuvel at the McNally House on Thursday, January 13 at the age of 90. Cherished husband of the late Willy (2012). Loving father to Sharon (Ken) and Brian (Barbara). Will be dearly missed by his grandchildren Corey (Nhung) and Carrie-Anne. Dear brother of Martha and brother-in-law of Anne and Hennie. Predeceased by his parents, dear wife, by his brother Jaap, and by his sister-in-law Bep. Peter was born in Aalsmeer, Netherlands and immigrated to Canada on March 29,1950. He started out farming and developed into a successful agricultural businessman. Peter was also very involved in the Mountainview Christian Reformed Church and the community in applying his energy and business skill to raise funds for charities and help develop and manage key causes. His family meant everything to him, and he will be deeply missed by all who's lives he touched. As per the family's wishes, a Private Family Service will be held. If desired, memorial contributions to the McNally House would be sincerely appreciated by the family. Arrangements entrusted to STONEHOUSE-WHITCOMB FUNERAL HOME, GRIMSBY, 905-945-2755.

Published by St. Catharines Standard on Jan. 15, 2022.
To plant trees in memory, please visit the Sympathy Store.
MEMORIAL EVENTS
To offer your sympathy during this difficult time, you can now have memorial trees planted in a National Forest in memory of your loved one.
Funeral services provided by:
Stonehouse Whitcomb Funeral Home
MEMORIES & CONDOLENCES
8 Entries
My condolences to you Brian and Sharon and your family. I am glad I had a visit with him just before Christmas. Many memories were shared. Uncle Pete and Tante Wil were a big part of our lives growing up.
Shirley Van Rijn
January 23, 2022
Brian and Sharon, so very sorry for your loss. We will miss our 'Uncle Pete'. I was glad to have been able to visit with him before our move in September. He was a very special person. Uncle Pete and Tante Wil were my parents best friends and they have always been a part of our lives. Just like family.
Ingrid Van Rijn
Friend
January 22, 2022
He was so blessed and now he can be with his wife in Heaven. He spoke of his life and how they met. He had accomplished so much with his life. A great Man to look up to. He sure touched a lot of our hearts.
Nancy PSW
Friend
January 19, 2022
Metha and I have known Peter both as a good friend and a member of the Mountainview Church Music Committee. We mourn with his family but rejoice in the fact he is now re-united with the love of his life, Willy
John and Metha van der Beek
Friend
January 16, 2022
Our most sincere condolences with the loss of Peter. We will miss him and his love for the concerts he was so often intricately involved with at Mountainview. May God grant you his peace during this difficult time.
Henry & Olga Dekker
Friend
January 15, 2022
My sincerest condolences in the loss of your father. May God surround you with comfort and peace in this time of sorrow and loss.
Donna Smit
January 15, 2022
My condolences with the passing of your dear father. May God surround your family with peace and comfort.
Shirley Batenburg
Friend
January 15, 2022
Our deepest condolences with your father's death. His absence in church has been felt, and he will be missed. I would love a brief covid visit with you, Sharon and Brian, please give me a call /text and we can arrange something. Liz 905-869-3814. So sorry for your loss!
Albert and Liz Witteveen
Other
January 15, 2022
Showing 1 - 8 of 8 results