You are now on Legacy.com. Your site use is governed by their Terms and Conditions and Privacy Policy. Any purchases are with Legacy.com. Learn More
Angus W. J. ROBERTSON
1930 - 2019 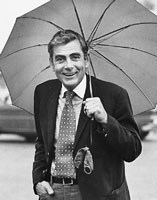 BORN
1930
DIED
2019
FUNERAL HOME
Racine, Robert & Gauthier Funeral Home
180 Chemin Montreal Road
Ottawa, ON
ANGUS W. J. ROBERTSON (Ron) May 30, 1930 - December 28, 2019 Our beloved Dad passed away on December 28, 2019, at the age of 89. Ron was born in Toronto and grew up in Montreal, Nassau, and Montebello. He was one of the original first-year Charter Members of Sedbergh School, and earned degrees from Bishop's University (BA '50), Oxford (Wadham College, BA-MA '53) and McGill University (BCL '56). His career in the Foreign Service included postings to Colombo, Sri Lanka and the UN in New York, and he later served as Ambassador of Canada to Finland. His last posting was as Minister and Deputy Permanent Representative to the Conference on Disarmament at the UN in Geneva, Switzerland. Ron was an expert skier and daily jogger, had a lifelong interest in cooking, and was a generous host to friends and family. His natural curiosity led him to be among the first to try new technology, and he loved travelling and exploring the world until late in his life. He had an encyclopedic knowledge of literature and world history and was a great, spirited storyteller. He was a born animal-lover. His home, like his mind, was always open, and many friends gathered at his table over the years. He was a loving father and grandfather, and the keystone to our family. Son of the late Angus Gerald Robertson and the late Catherine Grace Waldron. He will be greatly missed by his children, Miranda Abrams (Douglas), Anthony Robertson (Isabelle Solon Helal), Alexander Robertson (Huma Fazil), and Zoë Robertson; and his grandchildren, Sydney, Elliott, Harry, Émilie, Sophie, and Haris. He will also be fondly remembered by his former spouses, Rochelle de Zylva Schmallenbach and Terhi Salomaa; as well as cousins, Marion (Manny) Robertson and Chuck Gross, Renée Sorese and Marc Gelinas; along with extended family and many friends and former colleagues around the world. He was predeceased by his brothers, Douglas and Richard Myles and by his cousin, Susan (Suzy) Robertson Sorese. The family would like to thank Anita Herrera for her support over the years. Family and friends are invited to Racine, Robert & Gauthier Funeral Home at 180 Montreal Road Ottawa, Ontario on Saturday, January 11, 2020 for a visitation from 12:30 p.m. to 3:30 p.m., followed by a Funeral Service at 3:30 p.m. in the chapel of the funeral home. Your tributes can be sent to: racinerobertgauthier.com
Published by The Globe and Mail from Jan. 4 to Jan. 8, 2020.
To plant trees in memory, please visit the Sympathy Store.
MEMORIAL EVENTS
Jan
11
Visitation
12:30p.m. - 3:30p.m.
Racine, Robert & Gauthier Funeral Home
180 Chemin Montreal Road, Ottawa, ON
Jan
11
Funeral service
3:30p.m.
Racine, Robert & Gauthier Funeral Home
180 Chemin Montreal Road, Ottawa, ON
Funeral services provided by:
Racine, Robert & Gauthier Funeral Home
MEMORIES & CONDOLENCES
3 Entries
Condolences to Ron's family. We enjoyed having Ron as part of the Ottawa Hash House Harriers running group over the years. He will be missed.
Jennifer Rae-Brown
January 11, 2020
Very sorry to have lost my friend and former colleague, one who apart from his sense of being, was an inspired and inspirational member of the Canadian foreign service. He will be remembered and missed by us and many others in his wide circle. Heartfelt condolences to Ron's family and friends.

In sympathy, Chuck and Lisa Svoboda