You are now on Legacy.com. Your site use is governed by their Terms and Conditions and Privacy Policy. Any purchases are with Legacy.com. Learn More
Clark William DAVEY
1928 - 2019 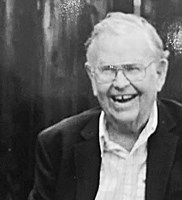 BORN
1928
DIED
2019
FUNERAL HOME
Tubman Funeral Homes
403 Richmond Road
Ottawa, ON
CLARK WILLIAM DAVEY March 3, 1928 - February 25, 2019 After a few days in hospital, surrounded by family, Dad passed away peacefully. He was a doting husband, father, grandfather and a champion of Canadian journalism. He is survived by his devoted wife of 66 years, Joyce Davey (née Gordon). Dearly loved father of Richard (Rita Celli), Kevin (Margaret) and Clark Jr. (Shelley Grist). Dad will be greatly missed by his grandchildren Michael, Kira, Stephen, Jason, Nicole and Christian. Dad is survived by his brother Kenneth George Davey. Dad will be missed by his several nieces and nephews, and a wide circle of friends. Dad never forgot where he was from: growing up in Chatham, Ont, in a family that struggled to put food on the table during the Depression. This kept him grounded and motivated to strive harder and reach higher. Dad succeeded magnificently with elegance, grace and vision, guided by an unshakeable set of principles. We are so proud of his professional accomplishments but he's so much more to his family and friends. His eagerness to spin a yarn, his puckish sense of humour, his delight at a clinking glass at cocktail hour at Who Cares Manor, endless piles of books and newspapers and always searching to understand more about the daily twists and surprises in the world. He had a fantastic, interesting life. We all wish he would have stuck around longer. Friends are invited to a Celebration of Life at the Westboro Chapel of Tubman Funeral Homes, 403 Richmond Road (at Roosevelt) on Friday, March 1, between 2 - 5:00 p.m. Shared memories and speeches at 4. Donations in lieu of flowers to Michener Awards Foundation, 130 Albert St., 201, Ottawa, ON K1P 5G4. Condolences, tributes and donations may be made at www.tubmanfuneralhomes.com
Published by The Globe and Mail from Feb. 28 to Mar. 4, 2019.
To plant trees in memory, please visit the Sympathy Store.
MEMORIAL EVENTS
Mar
1
Celebration of Life
2:00p.m. - 5:00p.m.
Tubman Funeral Homes
403 Richmond Road, Ottawa, ON
Funeral services provided by:
Tubman Funeral Homes
MEMORIES & CONDOLENCES
1 Entry
In my sixty years as journalist, the six years I spent as a reporter on the Globe (1970-1976) were among the most satisfying and rewarding of my career thanks to Clark. He was a pleasure to work for, in fact I think of him as one of my best bosses ever. He was demanding, fair and always supportive, and he always had my total respect.
Norman Hartley
March 2, 2019
Showing 1 - 1 of 1 results