You are now on Legacy.com. Your site use is governed by their Terms and Conditions and Privacy Policy. Any purchases are with Legacy.com. Learn More
J. Blair SEABORN 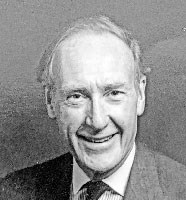 J. BLAIR SEABORN, CM In Ottawa on November 11, 2019, in his 96th year, after a full and rewarding life. Predeceased in 2011 by his loving wife, dearest friend and companion of over 60 years, Carol (Trow). Blair was the proud father of son Geoffrey (Jan de Pencier) of Toronto and daughter Virginia of Mont-Tremblant, and "J.B." to beloved grandchildren Emma (Rob Grundy), Claire (Michael Currie) and Adam Seaborn. He was delighted to have lived to see two great-grandchildren, Fraser and Sloane Grundy. He is fondly remembered by Carol's siblings Virginia Ings, Allen Trow, Ben Trow and Marion Doheny. Born in 1924, the youngest child of the Reverend Richard and Muriel Seaborn of Toronto, he was predeceased by his siblings, Kitty (Smith), Richard, Jean (Bertram), Jack, Bob, Charlie and Ted, but is survived by nieces, nephews, their spouses, and their progeny too numerous to mention. After the University of Toronto Schools, he studied political science and economics at the University of Toronto (Trinity College) where, following three years in the Canadian Army, he earned his M.A. in 1948. He entered the federal public service and spent the next twenty-two years at the Department of External Affairs with postings in The Hague, Paris, Moscow and Saigon, the latter as Canadian Commissioner for the ICSC in Vietnam. His life as a diplomat was followed by nineteen years in senior federal positions with the Department of Consumer and Corporate Affairs (Assistant Deputy Minister), Environment Canada (Deputy Minister), the International Joint Commission (Canadian Chairman) and the Privy Council Office (Intelligence and Security Coordinator). After "retirement", he spent eight years as chair the federal Environmental Assessment Panel on Nuclear Fuel Waste Management. He was honoured to receive the Order of Canada in 2000. Blair was grateful to have had a long, varied and satisfying career, for the opportunity to contribute to the life of Christ Church Cathedral and other voluntary work; and for good health which enabled him to enjoy, into his 'nineties, numerous outdoor activities, membership in the Rockcliffe Lawn Tennis Club, the Five Lakes Fishing Club, the Rideau Club Round Table and weekends at his "dacha" in Mulgrave-et-Derry. A man of enduring modesty and unfailing courtesy, he earned the great respect of his colleagues and the deep affection of friends and family. A funeral service will be held at Christ Church Cathedral, 420 Sparks Street, Ottawa on Sunday, November 17 at 4:00 p.m., followed by a reception in Cathedral Hall. No flowers by request. If desired, donations in Blair's name may be made to Trinity College, Toronto or Christ Church Cathedral, Ottawa, for restorations.
Published by The Globe and Mail from Nov. 13 to Nov. 17, 2019.
To plant trees in memory, please visit the Sympathy Store.
MEMORIAL EVENTS
Nov
17
Funeral service
4:00p.m.
Christ Church Cathedral
420 Sparks Street, Ottawa , ON
MEMORIES & CONDOLENCES
10 Entries
To the Seaborn family -- What a privilege it was to work with Blair for 19 years after he left External Affairs. Always a gentlemen, tactful and wise. I'm truly grateful for our friendship of almost 50 years. Blair's life was exemplary as I'm sure you already know. Many people will feel his loss -- including me.
Sincere condolences.
Helen Andrews
December 21, 2019
Dear Seaborn Family, I am truly sorry for your loss and to have to say goodbye to Blair. Blair did my parents the honour of becoming my godfather in 1962, and he continued to honour that commitment for the next 57 years in his relationship with me. Blair and Carol always made family gatherings more interesting and pleasant. Blair always knew what I was up to, where I was at school, who I was working for, and always had useful advice for me. He sent updates via Christmas cards every year, and of course never missed subscribing me to either Canadian Geographic magazine or Canadian History. He joined Frances and me each year on the porch at D1, reminding us of our childhoods while sharing some of his own rich experiences. He was a true friend to my mother, before and after her stroke. I will miss him. Thank you Blair for your friendship. You will be remembered with affection.
Jeremy Roberts
November 29, 2019
As a staff member of the Atomic Energy Control Board, I had the pleasure of participating in "the Seaborn Panel" in the 1990s. During the hearings, Mr Seaborn established and maintained a climate of respect and intellectual rigour that brought out the best in participants. He was a role model public servant who quietly contributed to the good of Canada.
Cait Maloney
November 19, 2019
I enjoyed working with Blair on a few projects at the CIIA, now Canadian International Council. His incisive, no nonsense approach, combined with a good sense of humour, made everything work better.
Craig Hunter
November 17, 2019
What an energetic, delightful and fun person Blair was - the husband of my cousin Carol Trow. My wife and I will definitely miss the fun times we had with him, Carol, and their children at his dacha.
B. Allen McCormick
November 16, 2019
Blair was a true gentleman of the "old school" and a pillar of the Christ Church Cathedral community. His dedication to the restoration activities there over a very long time have been much appreciated. His loss will be felt by many outside the family circle, I'm sure.

My condolences.
Elzabeth Taylor
November 16, 2019
Andrei joins me in sending Blair's family our deepest sympathy on the lost of this fine man.
Blair was the first ADM I served with after joining the federal department of Consumer and Corporate Affairs in 1970. I recall his skillful issues management style and the meticulous notes he kept in a log-like ledger to record each significant moment of every day.
While we each moved on from that association, we kept in touch, particularly at Five Lakes Club he and Carol so enjoyed.
I remember with pleasure our many conversations at various dinners and lakeside where Blair's wisdom, charm and courtesy shone. Who will ever forget how often he led the 'pack' in various outings, whether skiing or canoeing, swimming?
May the memory of Blair as was his life be a blessing.
JoAnne Cohen Sulzenko and Andrei Sulzenko
November 15, 2019
To Ginny, Geoffrey and all the family - it was so sad to hear that Blair had died - the last of that generation of Seaborns. We will remember Blair as such a generous, calm and interesting person and so full of vigour and love of life. Our warmest thoughts are with you,
Leslie and Tom
Andrea, David and family
November 15, 2019
Dear Geoff and Ginny, our thoughts are with you. Love from the Kilbourn family.
Tim Kilbourn
November 15, 2019
We would like to offer to Ginny and the family our deepest sympathy on the lost of your father. Our prayers and thoughts are with you.
Lyne Guérer and Jacques Lessard
November 14, 2019
Showing 1 - 10 of 10 results