You are now on Legacy.com. Your site use is governed by their Terms and Conditions and Privacy Policy. Any purchases are with Legacy.com. Learn More
Thomas BERGER 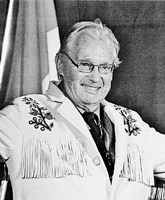 Bernadette Hardaker,
former CBC Radio Native Affairs writer/broadcaster
Bernadette Hardaker
May 4, 2021
In 1977, I had the pleasure and honour of editing a feature length documentary film about his Inquiry into the Mackenzie Valley Pipeline. He had incredible wisdom about who are are here in Canada. He was a great man who will be missed. My condolences to his family.
Joe Solway
May 3, 2021
Tom was both my friend and mentor. While much of his life centered around law, he had a wider interest and for me his interest in the education of Indigenous people was a great bonus to my work at UBC. I arrived here as the Director of the Native Indian Teacher Education Program in 1981. I met him almost immediately through his wife Bev who was the NITEP Coordinator at the time. All that existed at the time targeted to Indigenous students was the Law Program and NITEP. As we sat and visited one day, he said that more should be happening at UBC to promote access and support to Indigenous people and their communities. That led to us meeting with then President Pedersen. He agreed and he struck a committee co-chaired by to Tom and me. The committee consisted of faculty members and Indigenous community members. In a short time we delivered out report to the President who agreed with the recommendations to consider how to best have the University serve the students and communities in BC. However, it was a time of fiscal restraint and monies were not available to pursue the recommendation. A year or more later, Dr. Strangway was to become the next president and the fiscal situation had changed. Tom suggested he send a letter to Dr. Strangway advising him about the Report before he even arrived here. To our surprise he arranged to have me meet him at his office at UBC the Friday of his first week. At the meeting he spoke of the report and asked if it was a direction we still wished to take. I answered in the affirmative and told him some seed money was promised by the Donner Canadian Foundation if we were to pursue this. His response, "Well go for it". We formed an advisory committee with Tom as the chair. A concept known as the First House of Learning was the result. Its primary goal was to work with the university as a whole to provide access and support to Indigenous students. Today, we witness at graduation time, students graduating from many different faculties resulting in expertise to assist our communities on the road to self government. Tom was the key to this movement. This is probably just one of the stories of Tom's influence that is not widely know. His work is done. May he rest in peace.
Verna J. Kirkness
Friend
May 3, 2021
I had the luck and pleasure to meet Tom, Bev and their family in their home in 2010. I was impressed when I saw all the awards which Tom had received from Indigenous Canadians. We had some inspireing discussions concerning law. I feel with Bev and the whole family and I am thinking of Tom and you. I am distantly related to Bev.
Christian ( a brother of Magda)
Christian Brünner
May 2, 2021
I just once had the opportunity to meet Tom in Graz, Styria and I thought, that he is a warm hearted person.
I feel with you, Beverly and I wish you much energy to get over this big loss.
I will put a candle into the chapel opposit my house burning also for Tom.
Your far away cousin
Magda
Magda Schlossern, Austria
Friend
May 2, 2021
In loving memory of a wonderful person. We will love you and miss you always.
Marilyn Crosby
May 1, 2021
Showing 1 - 6 of 6 results