You are now on Legacy.com. Your site use is governed by their Terms and Conditions and Privacy Policy. Any purchases are with Legacy.com. Learn More
William Sterling HAYNES
1928 - 2020 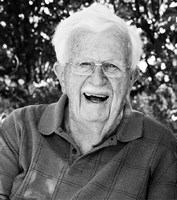 Sterling was raised in Edmonton by his larger-than-life mother, Elizabeth Sterling, a dramatist and actor, and Nelson Willard, a dental surgeon and avid sportsman. He and his older sister, Shirley, grew up in a household filled with books, actors, music, intellectuals, art, and a host of down-on-their-luck eccentrics. As a teenager, Shirley fired an incompetent nanny and looked after her brother. They remained devoted to each other, except-later in life-when it came time to pay for a meal and they tussled over the check.

Depression-era Edmonton was a force in his life. Sterling had to work to earn his keep. He complained about having to wear plus-fours through secondary school while pining for long pants and struggling to meet his sister's scholastic achievements. When he fell short of the mark, his mother would quote a line from Shakespeare's Julius Caesar, "The fault, dear Brutus, is not in our stars but in ourselves." He felt closest to his dad when they were fishing or playing ball.

He majored in Biology and Chemistry at the University of Alberta and then signed up to become a Colonial Officer when he couldn't find a job in post-war Canada. His mission was to establish fish farms in the Northern territories of Nigeria to combat rampant malnutrition and protein deficiency. He wrote about his time in the bush dredging ponds, eating groundnut stew, and occasionally visiting the tennis club with his fellow officers in Lagos. At his post with an all-Nigerian crew, he was known as the White Lion. He returned to Canada after a bad bout with a tropical illness.

He wanted to go into education, but his father suggested he study medicine, like his sister. Between the two of them, they practiced for 100 years. Back in Edmonton, he met Jessie McKiddie Porter who had just been through a stint of teaching herself. Jessie appeared in a play his mother was directing, and Sterling helped with back-stage chores. Jessie was always shy on the subject, but he spoke of a fateful ride home from a cast picnic. "I had to ask her three times to marry me," so the story went, "but she said she wanted to see the world." The third time he presented her with luggage and promised they would travel together. They visited over a dozen different countries during their 64-year marriage.

Public health was a calling for Sterling. He interned in California at Oakland Medical Center's Emergency Room then worked in high-need areas like Williams Lake in the Chilcotin and rural Alabama in the American Deep South. As a young doctor, he thrived at the Burris Clinic in Kamloops, British Columbia. Wherever he practiced, he never said no to a consultation. He did rounds at prisons. He ran a VD clinic. He was the Hockey Doc for the Kamloops Blazers. Once he counted the number of babies he delivered-hundreds, he thought, maybe a thousand. His clinic was everywhere; travel his only down time. Retirement didn't suit Sterling. He took on locums and then evaluated Workmen's Compensation claims. For his immediate family, his peers in medicine, and his wide circle of friends, he was always the go-to for any ailment. Even at his retirement home, he was happy to give a second opinion.

Sterling believed in potential. He and Jessie raised four strong women with that open approach. He created stages and puppets for their neighborhood theatre company. He built a log cabin on a remote lake for summer retreats. On the rare times he was home for dinner, he peppered the conversation with questions on geography and science and literature and encouraged all to yell their answers. He was a feminist, too. "I'll help you get educated," he said to his daughters. "The rest is up to you." He did his best parenting on the tennis court where he taught persistence and discipline with gentleness and care. He was a proponent of the two-handed backhand and the patient rally, not a big serve-and-volley man. "Oh! Shot!" he'd call out if ever his daughters got one past him.

Sterling never let the truth get in the way of a good story. He was a proud father, father-in-law, and grandfather to Carson and Rachel, quick with accolades and overly generous in recounting accomplishments. He loved being Uncle Sterling to his many nieces and nephews (and grandnieces and grandnephews). After suffering from a stroke, he regained his functioning through studying poetry. He took to haiku and doggerel and wrote both with humor and style. Well into his seventies, he appeared at poetry slams. He enlisted his daughters to edit his stories that he published in medical journals and then collected in three volumes. He was a tireless promoter of his work and the work of fellow writers. He carried a box of his books in the trunk of his car, and he would sign and gift a copy to anyone who showed an interest.

This current pandemic made visiting almost impossible as Sterling struggled with numerous health issues. His two oldest daughters, Elizabeth and Melissa, saw him through to the end, as did Jessie. She remained his fiercest advocate. Her constancy helped him balance the emotional load of serving the public, though she never stopped wanting him to watch his weight and tuck in his shirt. His youngest daughters, Jocelyn in North Carolina and Leslie in Seattle, sent poetry and songs to gentle him.

The final lines of Tennyson's Ulysses, which Sterling often quoted, speak to the spirit of a complex and talented dreamer who always imagined bigger and better things for himself and for everyone he loved.

We are not now that strength which in old days
Moved earth and heaven, that which we are, we are;
One equal temper of heroic hearts,
Made weak by time and fate, but strong in will
To strive, to seek, to find, and not to yield.

Sterling appreciated all varieties of flowers, but he would probably prefer that you give to the cause closest to your heart in his name. A celebration of his life will be held at the Kelowna Unitarian Fellowship when it is safe to gather again.
Published by The Globe and Mail from May 30 to Jun. 3, 2020.
To plant trees in memory, please visit the Sympathy Store.
MEMORIAL EVENTS
To offer your sympathy during this difficult time, you can now have memorial trees planted in a National Forest in memory of your loved one.
MEMORIES & CONDOLENCES
2 Entries
I remember Sterling from the UFK when I was the temporary music director there. Sterling was a a beautiful soul. He would come and talk to anyone at the UFK in Kelowna, and would strike up an interesting conversation. I remember when Sterling would come to hear me play the piano at some of my gigs around town. He was always complimentary to me and he LOVED music. I did not know him for very long, but I will always remember him for his great personality.
David Sproule
Friend
November 26, 2020
Dr. Haynes was our family doctor when I was young. He was always kind and very gentle for a big man. He set the bar pretty high, I have had few doctors since that measured up. He was also a neighbour and I was a friend of his daughter. Our family was so sad when they moved away.
Sue Whitehead (nee Lane)
Neighbor
June 3, 2020
Showing 1 - 2 of 2 results