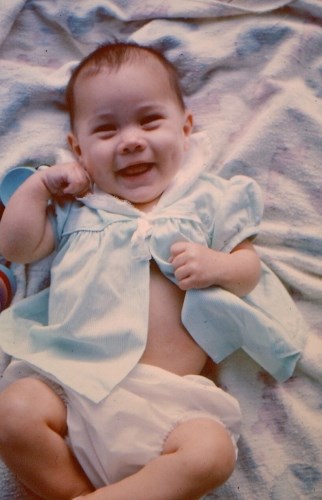 FUNERAL HOME
Evergreen Cremation Centre Ltd.
17 Gatacre Street
Ladysmith, BC
A Psalm of David
The Lord is my shepherd; I shall not want...
Yea, though I walk through the valley of the shadow of death, I will fear no evil; for thou art with me; thy rod and they staff they comfort me.
Thou preparest a table before me in the presence of mine enemies; thou anointest my head with oil; my cup runneth over.
Surely goodness and mercy shall follow me all the day s of my life; and I will dwell in the house of the Lord forever.

What a Wonderful Life

Wendy was born April 4, 1967, to two loving parents, Harold Warren Bowen and Janice Grace (Stapleton) Bowen. Cheryl Lynn (Bowen) Franklin is her older sister, and John Michael Bowen, her younger brother. Wendy grew up loving sports, of which ice-hockey was her all-time favorite. Her father helped organize an all-girls team (except the goalie), which was able to play in the novice boys league. After two years, the girls got their own league. Wendy's dream career would have been Professional Hockey Player.

Although, somewhat shy, Wendy was able to make friends wherever she went. She loved being out in nature, with a group of friends. There are many fond memories with her group of high school friends, University of Waterloo (Kinesiology) and McMaster University (Physical Therapy) friends. Wendy also had cohorts of friends from the hockey teams she played on. From her years playing back in Peterborough from age 8-19, along with the Vancouver Island teams, the She Devils and the Shooters.

After graduating from McMaster University in 1996, Wendy set out on a huge adventure with her friend Heidi. They traveled and worked in Texas and then Kentucky, before heading back to Vancouver Island in Canada in 2000. Heidi's mom thought it was all Wendy's idea, but Heidi was the leader of this big adventure.

Wendy and Heidi co-managed a smaller clinic in Duncan, BC for almost five years, before Wendy set out on her own, eventually starting her own clinic. With the help of friends, Heidi, Bonnie Webb, and Connie Klotz, Start Line Physiotherapy was launched. The clinic grew organically for six years, before Wendy sold it in 2016.

Wendy worked for twenty-years as a physiotherapist in the Cowichan Valley, before officially retiring in September 2021 because of the diagnosis of stage IV colon cancer. This diagnosis was the test of all tests. Wendy was forced to apply all of her spiritual lessons, to face the loss of her physical stamina, and source of income.

Those who knew Wendy well, knew that she was a giver, but not a great receiver. Cancer forced her to accept the help of other people. Wendy was also a DIP (Dysfunctional Independent Person - as described by Robert Holden). While she attempted to hold on to as much of her independence as possible, she did have to again let the reins loosen and allow other people to help her.

Wendy wasn't perfect, though she would like to have people believe she was. She was Flawbulous (Robert Ohotto). She was drawn to the teachings of Robert Ohotto, after meeting him on the Caroline Myss Mystical Tour of Spain in 2018. Robert introduced Wendy to her shadow Co-dependent, Rescuer, Blood Donor, and Unrequited Lover archetypes. As well as to the concept that "You are enough, just because you are here." Stripped of all but the basic ability to function, allowed Wendy to really examine her feelings of uselessness, unless she was helping other people (Shadow Rescuer).

Wendy believed in a Higher Power, a Creator. Not as a man in the sky, rather as a Cosmic Force. She also believed that each Soul does have a contract here on Earth.

Wendy believed she lived a full and rich life. This really became evident to her when she started making her remembrance video. Her life was rich because of all the people who graced and touched it. Some only for a moment. Others for many years. One of her gifts, other than her intuitive physiotherapy hands, was the ability to find the good in someone else. To go beyond someone else's outward behavior and sense the wound underlying the behavior. Even with all the crappy stuff that happens in this world, she truly loved the concept from Dwitt Jones, "Celebrate what is right in this world."

No one promised us fair here on Earth. Wendy's body may have given way to the cancer that engulfed it, but her spirit will live on in all whose lives she has touched. Her Soul is eternal. You can honor Wendy's life, by living your own to the fullest and through practicing love, compassion, and non-judgement. Don't worry about being perfect. Just do the best you can each day.

On November 15, 2021, while at home and after a lengthy and courageous journey with cancer, Wendy transitioned to the next realm. Wendy is remembered with love and gratitude for her presence in their lives, by her parents Harold and Janice Bowen, her sister Cheryl, brother-in-law Rob, and nephew Nathaniel Franklin as well as many cousins and friends.

To honor Wendy's life, donations to the Cowichan Valley Hospice, or your local Hospice, would be greatly appreciated by Wendy's family.

Condolences may be left at Evergreencremationcentre.com
Published by The Peterborough Examiner on Nov. 25, 2021.
To plant trees in memory, please visit the Sympathy Store.
MEMORIAL EVENTS
To offer your sympathy during this difficult time, you can now have memorial trees planted in a National Forest in memory of your loved one.
Funeral services provided by:
Evergreen Cremation Centre Ltd.
MAKE A DONATION
MEMORIES & CONDOLENCES
Sponsored by Evergreen Cremation Centre Ltd..
2 Entries
My condolences to Jan and Harold on the loss of your daughter here on earth! May she Rest In Peace!
Mary Joan Jaynes
November 26, 2021
Amazing!! Awesome Tribute to Wendy! She sure was an exceptionally special person. Thank you!
Diane
November 25, 2021
Showing 1 - 2 of 2 results