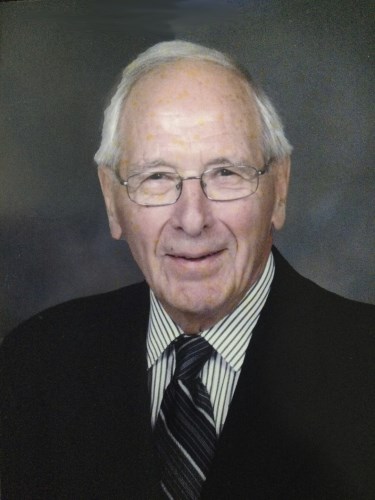 BORN
1925
DIED
2021
FUNERAL HOME
Dreisinger Funeral Home
62 Arthur Street South
Elmira, ON
Peacefully passed away on Sunday, July 18, 2021 at John Noble Home, Brantford, at the age of 95. Wil was born on September 21, 1925 and was the beloved husband and best friend of Verlin Irene (Cope) Lichty. They were married September 6, 1950, and lived near or in Elmira until September 2018, when they moved to Waterloo. Loving and wonderful father to Lisa Anne Lichty Klaehn. Proud Gramp to Donald Scott Klaehn, his wife Loralie and their twin daughters Evie Marie and Madison Esme; Nathan Thomas Klaehn, his wife Samantha Cavanagh and their daughter Amelia (Millie) Jayne Cavanagh; and granddaughter Alissa Leigh Klaehn. Wil joined the Royal Canadian Engineers at the age of 16. He was a dispatch rider during WWII riding a Harley in England and a 'Snortin' Norton' in Europe. He was wounded in Elbeuf, France near Boulogne, and spent a year in Purley, England for rehabilitation, exploring small English towns with train trips on leaves, making friends everywhere. Wil was the co-owner of Elmira Insurance Agency Limited, having joined with Fred C. Forwell in 1948, and sold Elmira Insurance Brokers in 2012. He took on leadership positions in the Junior Chamber of Commerce (Jaycees), locally, provincially, and nationally. Wil was involved with the Court of Revision - Waterloo County, was President of Waterloo Insurance Brokers, and Director of Ontario Insurance Brokers. He was a member of the Elmira Town Council for two years, and treasurer of the Elmira Fairboard Association for 22 years (later Elmira Raceway). He was active in the Lions Club and Masonic Lodge, and a member of the Drumbo hunt club. He enjoyed many fishing trips, and travelled the world with Verlin, returning to England several times. He took pride in their home in the country, always busy to keep it in top shape. He loved riding his motorcycle and trail rides on his snowmobile - and had endless patience to dig young snowmobile riders out of drifts when they got stuck, and to shovel the pond for skating. He was a gracious host, had a quick wit and enjoyment of wordplay, an avid reader, taught Lisa and the grandkids to play cribbage (and sometimes they would win). He enjoyed theatre and the KW Symphony, movies, and playing bridge with friends. He is survived by his sisters-in-law Donna June Cope Lindsay and Emma Buehler Cope Dundon. Also survived by Emma's children, Warren Cope, his wife Stacy and their children Melina, Colin, Shelby and Hayley; Stewart Douglas Cope and his wife Brenda and their children Melissa (Cody McDonald) and Clifton Andrew; Donna Louise Cope Herteis and Jeff Herteis and their children Valerie, Rachel and Steven. Predeceased by parents Harvey Lichty (1927) and Salome Roth Lichty (1971) and by his sisters Beatrice (1938), and Edith Turnball (Matthew) (2011); and brothers-in-law Clifton Reginald Cope (1983) and Rowland Angus Lindsay (1996). At Wil's request, cremation has taken place. In lieu of flowers, donations to Doctors Without Borders or Mennonite Central Committee would be appreciated as expressions of sympathy, and can be made through the Dreisinger Funeral Home, Elmira. www.dreisingerfuneralhome.com

Published by Waterloo Region Record on Jul. 21, 2021.
To plant trees in memory, please visit the Sympathy Store.
MEMORIAL EVENTS
To offer your sympathy during this difficult time, you can now have memorial trees planted in a National Forest in memory of your loved one.
Funeral services provided by:
Dreisinger Funeral Home
MEMORIES & CONDOLENCES
Sponsored by Dreisinger Funeral Home.
1 Entry
The Canadian Military Engineers extend to you and your family our deepest sympathies in your time of sorrow with the passing of Wilbur Lichty.