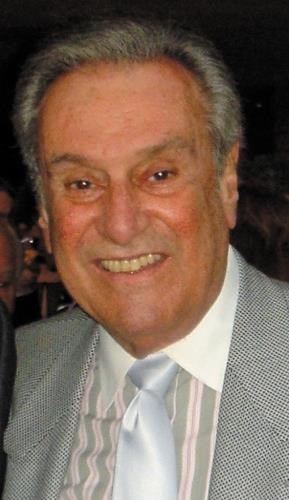 WOLFIN, Louis March 3, 2017 It is with heartfelt sadness that the family of Louis Wolfin announces the passing of our loving husband, father, brother, grandfather and father in law. He is survived by his loving wife of 57 years Joan, and children LeeAnn Wolfin, Lisa Wayrynen, Samra Mitchum, and David Wolfin, daughter in law Debbie Wolfin, son in law Matt Wayrynen and sister Sandy Roy. He was a proud grandpa to his precious grandchildren Allexanne, Talin, Taisha, Skyla, Ryan and Amanda. Born in Winnipeg from immigrant parents from Belarus as a young man he made Vancouver home and found his bride from Australia. He had a stellar career in the mining industry with the success of the pyramid mines in the 1960's, reopening the Avino mine in Durango Mexico and the Bralorne Mine in British Columbia and the Coral gold property in Nevada. In the 1970's, he was involved in the first disposable camera, owned the patent on holograms and had a keyless door lock entry system that is only coming to the market now. He was a true visionary. He had an open door policy and was a mentor to many people in the mining business. He was a true giver with a large heart. He had many friends all over the world as he travelled extensively. He was a generous person and a contributor to the VGH hospital heart division, the Vancouver police, RCMP, and many Jewish organizations including planting 2000 trees in Israel in honor of his parents. The funeral is at Har El synagogue, 1305 Taylor Way, on Tuesday, March 7, 2017 at 12:30pm followed by a gathering at 1985 Bellevue Ave, Buzzer #47. Although you are in our hearts and we have many fond memories We will miss you forever.

Published by North Shore News from Mar. 10 to Mar. 12, 2017.
To plant trees in memory, please visit the Sympathy Store.
MEMORIAL EVENTS
To offer your sympathy during this difficult time, you can now have memorial trees planted in a National Forest in memory of your loved one.
MEMORIES & CONDOLENCES
8 Entries
I was a close friend to the family along time ago. Lou and all of his gadgets, not kidding. A loving father and more but he always seemed to be there for you. Rest in Peace Lou.
Wendy Almerling
Friend
April 30, 2018
I'm truly sad to learn of the passing of Louis Wolfin; because, now I will never get the chance to thank him for encouraging and convincing me that I could be a mine writer. God bless you, Lou, and may you rest in peace.
Joseph Wemmerus
March 18, 2017
Thank you everyone for your kind wishes. My dad was the best dad in the whole world and am deeply sadded.You are in my heart forever...Leisel
March 14, 2017
Hello LeeAnn and David,

I was sorry to miss your father's memorial. I was on the road coming back from Mexico. He was always a gentleman and a pleasure to work for. You are doing a great job honouring his legacy by making Avino successful and bringing (hopefully) Bralorne back into production.

David St. Clair Dunn
David Dunn
March 14, 2017
Lou was an inspiration and a great mentor as he set me off on a successful investment career. Working for him was an adventure. There was always a new idea, a new deal...people to meet, places to see.Never a dull moment. My condolences to the family, which was so important to him.
Tania Murenko Willumsen
March 9, 2017
Condolences to the Wolfin family. I have many wonderful memories of working with Lou. George Scott was Lou's lawyer. George was kind enough to introduce Lou to me when I was "still wet behind the ears" as my mom would say. Lou was very kind to me as a young lawyer. Our highlights of working together was surely the piggyback Levon offering (perhaps the finest piggyback deal done on the VSE?) and the listing of Coral Gold. In our time working together Lou was always even-tempered and patient. Lou was generous as well and doled out a few nuggets of wisdom that I still retain to this day and that assisted me when I became an entrepreneur. A life well lived.
Robert Cheney
March 8, 2017
Light Perpetual shine upon him.May he rest in Peace.
Aileen Engs
March 7, 2017
My thoughts and prayers are with you at this challenging time. Lou was and is a legend! And what a legacy.
Sally Elliott
March 7, 2017
Showing 1 - 8 of 8 results