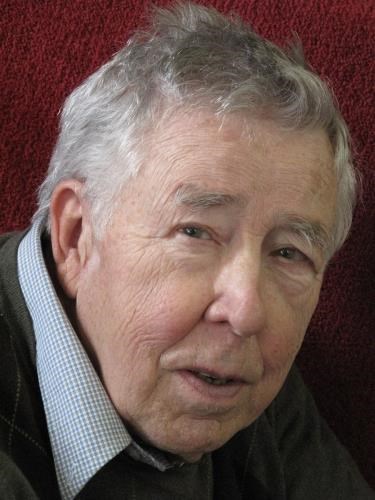 BORN
1928
DIED
2020
ENGLISH, EDWARD "TED" Edward "Ted" English passed away at his home in Atascadero, on May 6, 2020, at the age of 91. Ted was born Edward Albert English on October 22, 1928 in Toronto, Canada, to Edward John English and Elizabeth Landess Kilpatrick. He spent many of his early years living and working at English's Boat House and as a lifeguard on Toronto Island. He was proud of his Durnan and Hanlan family legacies in the sport of rowing that included his great-uncle and hero, Ned Hanlan, World Champion oarsman in the 1880's. Ted graduated from the prestigious Jarvis Collegiate Institute in Toronto before moving with his parents to Los Angeles, California in 1949. Ted married Sylvia June Clawson in 1950, shortly before enlisting in the Army where he proudly served in the Korean War as part of the "Remington Raiders" while stationed at the Presidio Army Base in San Francisco. While in San Francisco, Ted and Sylvia welcomed the first of eight children. Following the Korean War, Ted and Sylvia settled in Norwalk, California, where Ted was known for his vigorous community involvements, from the political to the personal, including taking his Volkswagen van full of neighborhood children to the local ice-skating rink weekly. He also got his children active in competitive swimming, published a kitchen tabletop, but professional quality swimming magazine, the 'Sunstroke' and helped organize and run the swimming program for the 1968 Watts Summer Games. In 1966, Ted heroically rescued and resuscitated a young girl during a flash flood in Colorado. Ted kept his rowing passion alive with the Long Beach Rowing Association and was often seen on the water by daybreak well into his 70's. Ted worked most of his career as an insurance broker, most significantly working for the George Elkins Company in Beverly Hills and subsequently created his own firm, where he managed insurance needs for the elite in the entertainment industry. His private stories of celebrity escapades delighted his family for years. In 1997, Ted and Sylvia pulled up in roots in Southern California and moved to a six-acre hillside property in west Atascadero, California. Ted brought his passion for rowing with him and was instrumental in the formation of the San Luis Obispo Rowing Club transforming an old, run-down County-owned snack-shack at Santa Margarita Lake into a fine boathouse that has attracted scores of folks to the sport of rowing in SLO county. For the past several decades, Ted also has been tirelessly dedicated to the preservation of Toronto Island history and the history of the sport of rowing. He may have lived on the other side of the continent, but his heart never left Toronto Island. Mostly, Ted will be remembered by his family for his interest in early Americana music, his 78 record and classic book collection, his sharp and witty mind, but most importantly, for the care and devotion to his disabled daughter, Christine, whom Ted provided care for until just months before his passing. Ted was preceded in death by his wife of 60 years, Sylvia and is survived by his children, Victoria (Ian - deceased), Scott (Debra), Deborah, Christine, Geoff (Celeste - deceased), Brian, Catherine (Mark) and Bruce (Joanne). Ted is also survived by thirty-three grandchildren and great-grandchildren. As Ted would often say, "There will always be an English!" Donations in the name of Ted English, may be made to the San Luis Obispo Rowing Club at P. O. Box 1587, Arroyo Grande, CA 93421 or at www.slorc.org. A memorial service will be scheduled in the future when gatherings are again permitted.
Published by Toronto Star on May 16, 2020.
To plant trees in memory, please visit the Sympathy Store.
MEMORIAL EVENTS
To offer your sympathy during this difficult time, you can now have memorial trees planted in a National Forest in memory of your loved one.
MAKE A DONATION
MEMORIES & CONDOLENCES
0 Entries
Be the first to post a memory or condolences.