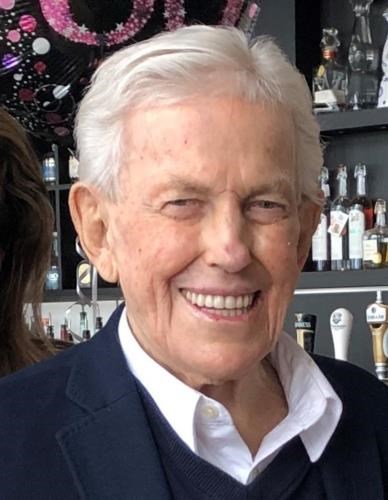 SCOTT, ROBERT BARRY May 12, 1933 – August 7, 2019 On August 7, 2019, God took the hand of our dearly beloved Robert Barry Scott to join Camilla and Christopher in heaven. Anne, the love of his life for 56 years, adored daughters Kari Anne (Anthony), Katrina (John), grandchildren, Breanne, Justin, Mackenzie, Marguerite, Riley, Serena, Bianca, Dominic and Sante, his brother and friend George and also Sharon all mourn the loss of his joyful presence. Bob was a dedicated educator for decades. Instructing in Film and Photography (Image Arts) at Ryerson University, he encouraged his students to explore and engage with media, understand it's significant social influence and impact and urged them to use their talents to revere the Earth and make it peaceful. He admired how indigenous communities respected our Earth and espoused the exhortation to care for our planet by Pope Francis in Laudatum Si. He served as head of Media Studies, instituted an international student exchange program and taught in the Film and Photography summer programme in PEI. After retirement, he co-produced a retrospective celebrating the centenary birthday of Marshal McLuhan, with whom he had studied, was an active member with the McLuhan Group through St. Michael's College at University of Toronto and presented papers at the Media Ecology Association conferences. For all his life, Bob was a deeply spiritual Roman Catholic and in recent years, with Anne at St. Anselm Church, was active in the charitable activities of The St. Vincent de Paul Society. He loved classical and sacred music, singing with the church choir and the friendship, activities and plans of the ecology group Ecoanselm. Bob graduated from GCVI, Guelph, earned degrees in English (Western U and UNB) and his PHD in Theatre (U of T). He taught English at Prince of Wales College in PEI, a year at Cedarbrae S.S., several years at St. Andrews College in Aurora and Upper Canada College, from 1967 to 1970 at the University of New Brunswick in St. John and finally from 1971 to 1998 media studies at Ryerson University. His final transition to media occurred during his co- leadership of the NFB Challenge for Change program in St. John NB, advocating for housing and services for those less fortunate families being forcibly displaced by ongoing vigorous urban renewal initiatives. Bob loved theatre and with Anne enjoyed myriads of great productions at Stratford and Shaw Theatres. He composed over 50 piano pieces to celebrate every happy birth, marriage and joyous family event initially, his marriage on July 20, 1963, to Anne. Until the last 2 months of his rich life, Bob loved and assisted his family in every way. Although he and Anne and the family sorrowed from losing Camilla and Christopher, they let love and joy of family, friends, every living creature and all sunny days prevail. We will honour him every day. Saint Vincent de Paul Society is his charity of choice. Mass will be held at 7 p.m. on Wednesday, August 14, 2019 at Saint Bonaventure Church on Leslie Street. Access only from Lawrence Avenue.

Published by Toronto Star on Aug. 11, 2019.
To plant trees in memory, please visit the Sympathy Store.
MEMORIAL EVENTS
To offer your sympathy during this difficult time, you can now have memorial trees planted in a National Forest in memory of your loved one.
MAKE A DONATION
MEMORIES & CONDOLENCES
9 Entries
Dear Anne and Family
So saddened by the news of Bobs passing. He was a wonderful kind soul. We always enjoyed our visits with you. He had so many interesting stories to tell especially of Mom and their early years together. He always said she was more like a sister than a cousin. Hopefully they will meet up again. Take care Pattee Clark
Pattee Clark
Family
August 16, 2019
I was saddened to learn a few days ago that Bob Scott had passed away last week. I knew him for about a decade because of his attendance at McLuhan-related events at U of T. When I sat down with him a few years ago and asked him what he had studied at U of T, I was surprised to learn that he had received his PhD for his theatre studies at what was then called the Graduate Centre for the Study of Drama, the program that I was later to enroll in some years later. Bob and I shared a love of theatre, which for both of us later morphed into media studies. He will be missed in the Marshall McLuhan community of interest at U of T. My sincere condolences to his family. Rest in peace, Bob.
Alexander Kuskis
August 14, 2019
From Elizabeth and family .
Happy memories.
Love to you all.
August 14, 2019
Remembering and celebrating a good and wonderful friend-ship of 36 years with you and Bob and your family. Love and condolences from or family to yours. I remember the fist time Bob sat at our table. He and Kevin bought a little boy's leg brace to be repaired. Cam had told Marie about. She replied, " My
Dad can fix it." And there they were.
elizabeth rutherford
August 14, 2019
Anne, Keri and Katrina. So sorry to hear of Bob's passing .Thinking of you during this difficult time .Will always remember his smile. Agnes St John's NL
August 13, 2019
Dear Anne, Kari and Katrina,

So sorry to hear this news. He was such a gentle and kind man. Our thoughts are prayers are with you all during this time.

Erin, Jason and Family.
xo
Erin Smith
August 13, 2019
Anne, Kerri and Katrina,
Condolences to you and your families. I remember Bob always with a smile. Thinking of you at this time.
Best wishes,. Deb Marron (Feeney). Xo.
Deb Marron
August 13, 2019
Hello Anne and family, we are thinking of you at this very sad time. Blessings, Martha and Murray
August 13, 2019
We are deeply sorry for your loss, Anne. Bob was always so cheerful and full of stories. He will be missed.
Mary and Mike Bartlett
August 11, 2019
Showing 1 - 9 of 9 results