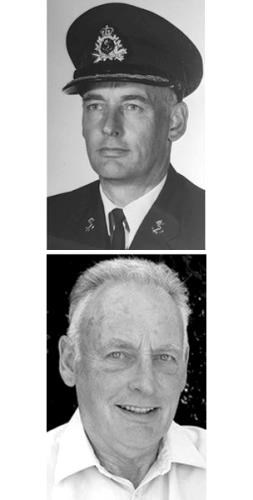 BORN
1926
DIED
2021
HOPE, Donald Bateman (1926 - 2021) Born in 1926 and raised in Victoria, BC, Don developed an enjoyment and appreciation of the outdoors from his mother, Mysie, with whom he spent summers camping in and around Sooke, Campbell River and many other favourite locations on Vancouver Island. With his grandparents, aunts, uncles and cousins, Don made many fond childhood memories. Especially dear to him were the adventures shared with his uncle Keith, who was close in age and more like a brother. Don attended University School where he graduated in 1943 before joining the Merchant Navy and later the Royal Canadian Navy. He was one of the early members of the Fleet Diving Unit and served on both the east and west coasts of Canada. It was while stationed in Halifax he met and married Laura Black in 1967, followed by the birth of their daughter Janice and son David. In 1970 Don was involved in the underwater oil recovery operation from the wreckage of the SS Arrow. He was later awarded the Order of Military Merit for his efforts with the salvage operation. Donald and Laura then moved their family back west to Victoria in 1974. Don continued with the Fleet Diving Unit Pacific and later retired after 41 years of naval service. In retirement he retained his love of the sea as a member of the Thermopylae Club and was also an active member of All Saints Anglican Church in View Royal. Don enjoyed morning walks in Uplands Park where he took a keen interest in the wellbeing of the resident hummingbirds. His daily routine was to pick an apple from the back garden and eat it along the way to the park. He was often followed by a seagull eagerly awaiting the apple core. Donald died in the early hours of Thursday, September 30th at Veteran's Memorial Lodge in Victoria. Predeceased by his parents Mysie (Douglass) and Geoffrey Hope, he is survived by his wife Laura, daughter Janice (Michael), son David (Rhonda), grandson Matthew and granddaughter Jocelyn. Don will be missed by his family and all who knew him as a kind, thoughtful and patient man. A private ceremony will be held at sea in the spring of 2022.

Published by Victoria Times Colonist from Dec. 4 to Dec. 6, 2021.
To plant trees in memory, please visit the Sympathy Store.
MEMORIAL EVENTS
To offer your sympathy during this difficult time, you can now have memorial trees planted in a National Forest in memory of your loved one.
MEMORIES & CONDOLENCES
Sponsored by the Victoria Times Colonist.
0 Entries
Be the first to post a memory or condolences.