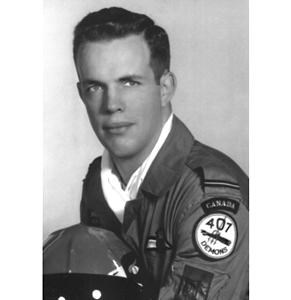 MUNRO, K. Douglas, Maj (ret) RCAF/CAF, CD, LLB November 16, 1933 - September 16, 2014 It is with great sorrow that we announce the death of K. Douglas Munro. Doug drew his last breath with his family at his side to comfort him and bid him farewell. Doug grew up on a homestead in Garrick Saskatchewan, where the values of hard work and community service as well as active participation in social events and sports were instilled at a young age. Farm life brought with it a love of animals, particularly dogs and horses. Doug rode a horse several miles to a one-room school and later attended Notre Dame College in Wilcox Saskatchewan. There, he developed a lifelong admiration of Father Athol Murray. Doug joined the RCAF at age of 18 in 1951 and received his wings as a navigator in 1952. He enjoyed both the flying and the camaraderie of the RCAF community. He perfected his bridge game and learned to golf, as well as polishing his skills at pool, darts and curling. During his airforce career Doug made life long friends and had the good fortune to see much of the world. In 1978, Doug attended law school at the University of Manitoba and was called to the Bar in 1982. In Winnipeg he practised law, first at Pitblado and Hoskins, before finishing his career as General Counsel for Manitoba Hydro. Doug embraced his second career with the same enthusiasm as his first. He was an active participant in the Bar Association and volunteered with the Law Society and community organizations. As in the military, Doug's honesty, hard work, and innate sense of ethics defined him. Throughout his life, Doug took great pride in his ancestry: from Cree elder Titameg, and early Canadian pioneers Catherine Parr-Traill and Thomas Traill, the hardy Munro clan, and Hudson's Bay Co. Chief Factor William McKay. In retirement, Doug assumed the role of family historian and laboriously researched and deciphered the letters of William Traill, which had been painstakingly collected by Pat McCloy. He also found time to pursue other interests, reading, golfing and maintaining his ever broadening circle of friends. Doug delighted in conversation keeping in touch with old friends and making new ones. Doug always believed he lived a fortunate life, particularly spending 53 years with the love of his life, Adele. He took great pride in his children and grandchildren. When Doug was diagnosed with Parkinson's Disease, it did nothing to diminish the gratitude Doug felt for a life well-lived. He was brave in the face of adversity, and has now joined the galaxy of ancestors whose values he embodied. A private cremation has taken place and a Celebration of Life will follow. Doug's remains will be interred at the Traill family cemetery in Meskanaw, Saskatchewan in Summer 2015. For those who wish to do so, donations can be made to the Parkinson's Society, or to a charity of your choice. Per ardua ad astra.

Published by Victoria Times Colonist from Nov. 1 to Nov. 3, 2014.
To plant trees in memory, please visit the Sympathy Store.
MEMORIAL EVENTS
To offer your sympathy during this difficult time, you can now have memorial trees planted in a National Forest in memory of your loved one.
MEMORIES & CONDOLENCES
2 Entries
Dear Adele, a wee note to say how sorry I was to hear of your husband's passing away. Ive been searching for you as Muriel Wyrcimaga was organizing a 54th sph reunion which was held this past September. I'm wondering if you have moved from Winnipeg to Victoria. You and your family have experienced a great loss. Please know I am thinking of you. Warm regards from an old friend, Linda Heinrich
[email protected]
Linda (strachan) Heinrich
February 9, 2015
My husband, Leo, and I were attending Notre Dame at the same time as Doug who was one of my classmates. Doug, always a "Hound" who lived up to the college motto,"Luctor et Emergo". Our condolences to Doug's family. He personified a life well lived.
Jeannette (nee Haughey) & Leo Mulhall
November 1, 2014
Showing 1 - 2 of 2 results