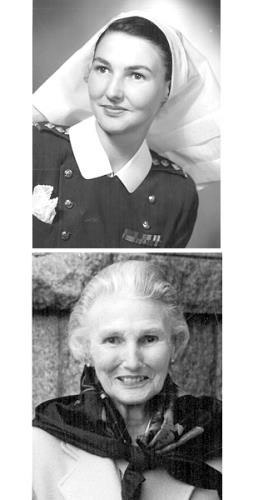 BORN
1918
DIED
2019
FUNERAL HOME
First Memorial Funeral Services - Fort Street
1155 Fort Street
Victoria, BC
HOPKINS, Gwendolen Diana (Wendy) (nee Pinhorn) On June 28, 2019, our mother, grandmother, mother-in-law and family leader, Wendy, passed away peacefully at home. She was born on October 30, 1918 in Hamiota, Manitoba, and her family moved to Victoria in 1920. She was the beloved wife of the late John D. Hopkins, and daughter of the late Mr. and Mrs. H.J. Pinhorn. She was pre-deceased by her infant son, Brian Anthony, and her brother, Tony, (S/L, DFC, Coastal Command RAF). Survived by her son Jim (Lindiann), granddaughters Zoë and Kiara and daughter Judi, and nieces and nephews and their families from Southern Ontario. Wendy received all of her early education at St. Margaret's School before going to London, England for Physiotherapy training at King's College Hospital. She returned to Canada in 1940, crossing the Atlantic accompanying British children evacuees. She then served in the Royal Canadian Army Medical Corps 1942-1952, being stationed in Hospitals in Canada, England and France during World War II; she was awarded the Royal Red Cross. These war years, and time spent in England and Norway with the Sclaters- a close family connection-shaped her as a young woman. Upon returning to Canada she became Captain and was Senior Physiotherapist in the R.C.A.M.C. stationed at Toronto Military Hospital. In 1952 she married Jack, S/L RCAF, and they lived in Colorado Springs, Ottawa and Montreal. In 1966 Wendy returned to Victoria with Jack and her children. She was a former member of the Victoria Golf Club and Canadian Club, supporter of the Arts and volunteer with the Red Cross. Wendy was our family's inspiration. She took such interest in what we were doing and always gave time to listen, share, encourage and shape. She was open-minded and lived by her motto of "grow until you go". Wendy was viewed as cool by her granddaughters. Wendy and Jack enjoyed travel around the world and enjoyed a great life together. She had many friends whom she loved dearly and Wendy will be missed deeply by us all. Many thanks to Dr. Geoff Luckhurst, the caring staff at Estevan Pharmacy, the wonderful team of caregivers, Island Health home care nurses and Hospice. A memorial reception will be held at the family home on July 20 from 2-4 p.m. Flowers gratefully declined in favour of contributions to a charity of your choice.

So sorry to read of your loss. You're in my thoughts.