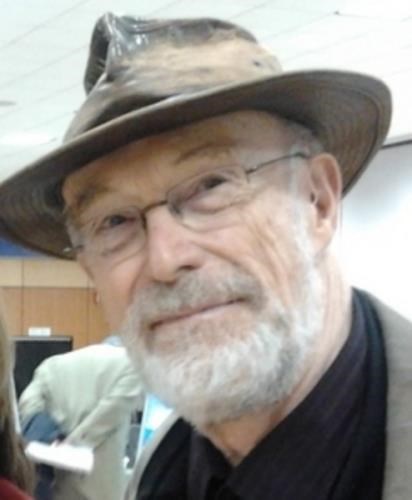 BORN
October 30, 1931
DIED
September 08, 2016
Ken passed away peacefully on September 8, 2016 at the age of 84. Ken spent his childhood years in China where his father worked with local farmers helping them develop sustainable farming methods. As a young man, he spent time at Naramata where, in 1950, he met Lois, whom he married 12 years later, after pursuing a degree in International Relations, followed by another from the Chelsea School of Fine Arts in London. They spent their early years as a family in Port Alberni where he worked as a junior high school art teacher. Ken and Lois navigated their separation with love and respect and continued a life long connection, parenting and grand-parenting together. He was passionate about his dreamlife and inner world. He explored it in his art and expanded it into his life by pursuing a Masters in Psychology. In Victoria, Ken met and later married Heather Hilliard. During their 25-year marriage they fulfilled their dream of moving to Tofino and living on Chesterman beach with their treasured cats and dogs, welcoming many visitors, friends and family. Ken took an interest in First Nations history and the damage of the residential school systems which he explored in his paintings. When Ken and Heather returned to Victoria they created a beautiful space in their condo downtown. He enjoyed getting out with Jesse, then Lola, to favourite places like Beacon Hill Park and Cattle Point. Ken will be remembered as an accepting, caring, gentle man with a passion for art, music, the environment and social issues, as well as his everlasting sense of humour, including the Faris proclivity for making puns! Ken is survived by a large and loving family including wife, Heather Hilliard, daughters Lynn (Blair) and Heather (Jeff), first wife Lois, step-children Robin (George), Andrew (Ineke), Martha (Chris), Jonathan (Jan), Sarah (Jim) and grandchildren Tessa, Owen, Bennett, Ben, Ellie, Geoffrey, Anna, Lucy & Hugh, brother Don (Dawn) and many nieces & nephews. He was predeceased by his brother Doug (Miriam). The family would like to thank those that provided him with care and support during the last number of months, including friends, family, his doctors and the wonderful staff and volunteers on the palliative unit at Saanich Peninsula Hospital. It was a great demonstration of how important he was to many people during his life. We welcome family and friends to gather and share memories of Ken and honour his life on October 1, 2016, from 1:30pm - 4:30pm at The Art Gallery of Greater Victoria, 1040 Moss St.
Published by The Times Colonist from Sep. 14 to Sep. 16, 2016.
To plant trees in memory, please visit the Sympathy Store.
MEMORIAL EVENTS
To offer your sympathy during this difficult time, you can now have memorial trees planted in a National Forest in memory of your loved one.
MAKE A DONATION
MEMORIES & CONDOLENCES
9 Entries
I met Ken through the art exhibition in Vancouver entitled "Net Eth" , which I had initiated and raised funds for. It was organized by the studio to which I belong, Malaspina Printmakers on Granville Island and was a show of First Nations artists on the subject of the Residential Schools, and illustrated the suffering endured by them and their descendants. I am still interested in Ken's work and wonder where the 4 paintings are now that were exhibited in that show. All four were shown in the concourse of Emily Carr university. If any of you know can you please contact me. I was very sorry to learn that he had died. He was a wonderful artist and a wonderful person. I will treasure the catalogue from that show and his participation in it.
Marie Price, Malaspina Printmakers, Granville Island, Vancouver
Marie Price
October 9, 2016
Ken was a fascinating man, who always made me think. I am so thankful for the many times he welcomed me into his home in Tofino and for the wonderful meals prepared by Heather. I called them my bonus grandparents.

Sending big love to his family.

Coral and family
Coral Thew
October 3, 2016
Sad to say goodbye. Ken's paintings will always trigger fond memories of Uncle Ken. I have one he painted for me in the late 1960's. My thoughts are with the family.
Heather Tatchell
September 17, 2016
Ken was always one of my favorites when I worked for Dr. Finlayson. His kindness and gentleness will always be remembered.
Jill Yoneda
September 16, 2016
Remembering my uncle Ken back in early 70's; as looking, listening, sharing and caring. Exploring the pathless path. I felt and appreciated his devotion to the mystery. Mitákuye Oyás'i
Brian McEwen
September 15, 2016
Ken was a helpful counsellor to me and a good group leader.
Christine Lowther
September 15, 2016
"And when the earth shall claim your limbs, then shall you truly dance." ~ Kahlil Gibran
Anne Faris
September 14, 2016
What a perfect picture of Ken, with his hat on, and his usual expression of interest in the world around him. Bless you, Jeff and Heather, who lovingly cared for him in his last months of life, and to all the family in this sad time.
Kathy and Bill Sheffeld
September 14, 2016
I struggle to find words. I've loved him as long as I can remember him. He was the cool uncle with a ponytail, an exceptional artist with a passionate intellect. He had a tortured and loving soul, and as I became an adult, he was my first (and always) trusted confidant. I'm grateful that I was able to share this with him. My thoughts are with his family and friends.
Peter Faris
September 14, 2016
Showing 1 - 9 of 9 results