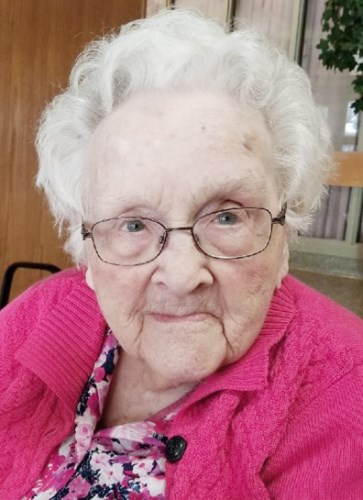 Kathleen Emily ("Kay") Davis 1916 - 2021 It is with sadness that the family of Weyburn pioneer Kathleen Emily "Kay" Davis advises of her passing on August 7th, 2021 at the age of 105, in Calgary, Alberta. She is survived by her son, Keith (Peggy) of Calgary and her daughter, Wendy (Rob) Petrie of Courtenay, BC. Kay is also survived by six grandchildren and four great-grandchildren. She was predeceased by her infant son, Ian, in 1956; husband, Grant in 1985; her son, Gary, in 1993; and her daughter, Pat, in 1996. Kay was born in the city of El Minya, Egypt in 1916 to British parents and was raised until the age of 10 at the family estate in King's Lynn, England. She came to Canada in 1927 and continued her upbringing at her aunt and uncle's homestead near the now-defunct village of Wiwa Hill, in southwestern Saskatchewan. She later attended teacher's college in Moose Jaw and received her Teaching Certificate, upon which she began teaching in rural, one-room schools throughout southeastern Saskatchewan, before marrying Grant in Weyburn in 1940. They lived on the Davis farm North of Weyburn until the late 1940s, at which time they moved into town. Kay later taught at Queen Elizabeth School in Weyburn for a number of years, before she, Grant and their children relocated to Kelowna. She then established a kindergarten in Kelowna, which she operated for 25 years before retiring. Kay and Grant had a wide circle of friends and loved to travel the world. She continued that travel following Grant's death, before finally relocating, at the age 90, to Calgary to be closer to family. Condolences or memories may be forwarded to [email protected]