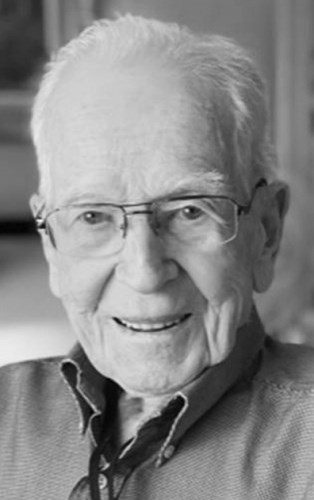 BORN
1923
DIED
2021
FUNERAL HOME
RD Family Funeral Chapel & Crematorium
1825 1st Avenue NE
Weyburn, SK
William John 'Red' Hearn William John "Red" Hearn passed away peacefully on July 25, 2021 at the age of 98 years. William John Hearn was born in Central Butte Saskatchewan on March 25, 1923 and grew up in Moose Jaw. He joined the Royal Canadian Air Force in 1941 and was posted to the RCAF Training Base in Moose Jaw as an Air Engine Mechanic. He was then posted to No 5 Manning Depot in Lachine, Quebec followed by a posting in St. Thomas, Ontario. His final posting was at Boundary Bay, British Columbia until the conclusion of WW II. After the war ended, John took a bookkeeping course in Vancouver before deciding to return to Moose Jaw to be with his mother and siblings where he started a career on the Canadian Pacific Railway Express. John's railway travels frequently took him through Weyburn, where he moved to in 1953 and became a Journeyman sheet metal fabricator and plumber. In 1956 John married Lil Dudar and they settled in Weyburn and started a family. John "Red" worked for Weyburn Sheet Metal for 23 years before joining the Weyburn Co-op where he retired from in 1990. In his early retirement years "Red" never really stopped working and he could frequently be found fixing and repairing things for friends and strangers. He had great enjoyment working in his yard and finding things to fix. Sometimes he would fix things that weren't even broken. Working with his hands was his retirement passion. John was a 56-year member of the Weyburn Legion as well and a member of the Knights of Columbus. While John enjoyed watching Weyburn Red Wings hockey, he found even more enjoyment watching his grandchildren play minor hockey and grow to be young adults. John was predeceased by his siblings, George Hearn, Mary Hearn, Kay Malloy and Patricia Stewart. In 2014 he lost the love of his life when Lil passed away and since that time he has resided at Hilltop Manor where they took great care of him. John is survived by his four children; John (Edmonton), Richard (Teresa Rose - Calgary), Cathy (Derek Schlosser - Whitecourt) and Teresa (Jerry Lafoy - Weyburn).Grandpa Red was a proud Grandfather to his 5 grandchildren; Conor and Madison Lafoy, Jack and Emma Schlosser and Riley Hearn. Prayers were held on Thursday, July 29, 2021 at 7:00 p.m. from RD Family Funeral Chapel, Weyburn, SK. A Mass of Christian Burial was held Friday, July 30, 2021 at 11:00 a.m. from St. Vincent de Paul Roman Catholic Church, Weyburn, SK with celebrant Fr. Francis Plaparampil. Pallbearers were: Conor LaFoy, Madison LaFoy, Jack Schlosser, Emma Schlosser, Riley Hearn and Terri Molloy. Honour Guard were the Royal Canadian Legion, Weyburn Branch #47. Interment was held at Hillcrest Cemetery, Weyburn, SK with a funeral luncheon following at the Weyburn Royal Canadian Legion. "Red" was a true Gentleman and will be missed by all who had the pleasure of knowing him..... For family and friends so wishing charitable donations in memory of Red may be made to the Royal Canadian Legion, Branch #47, 150 ~ 3rd Street, Weyburn, SK, S4H 0W2. Arrangements were entrusted to RD Family Funeral Chapel & Crematorium, Weyburn, SK (848-0333 ~ 1-888-848-0333). Expressions of sympathy to the family may be sent to our website at www.rdfuneralchapel.com "Honouring Life and Celebrating Memories."

Published by Weyburn Review from Aug. 4 to Sep. 3, 2021.
To plant trees in memory, please visit the Sympathy Store.
MEMORIAL EVENTS
To offer your sympathy during this difficult time, you can now have memorial trees planted in a National Forest in memory of your loved one.
Funeral services provided by:
RD Family Funeral Chapel & Crematorium
MEMORIES & CONDOLENCES
0 Entries
Be the first to post a memory or condolences.