In 1862, the J.B. Cole & Son Funeral Home was established on the corner of Dorchester Avenue and Silver Street in South Boston, one block south of where the MBTA’s Broadway station is located today. In those days, a hearse was a stately black carriage, drawn by black horses wearing plumed headgear.

Near the turn of the century, Chapman family member Harry O. Phillips went to work for Jabius B. Cole. Eventually, Phillips purchased the business and relocated to Upham's Corner in nearby Dorchester, where he also operated a livery stable. The house Phillips purchased at 490 Columbia Road, where it meets Bird Street, served as both his home and his place of business.

When Phillips died in 1938, his nephew Charles P. Chapman, who had been working with him, took charge of the firm. In 1950, Chapman purchased the R. & E. F. Gleason Funeral Home in Codman Square, merging the two businesses and the two names. Chapman then built the J.B. Cole & Gleason Milton Home for Funerals in 1955, the first funeral home in the town of Milton, where the Chapman family lived. 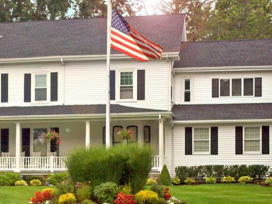