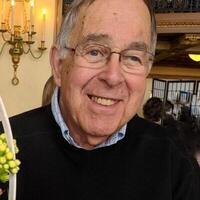 Al was a fun guy! I enjoyed seeing him holding down the fort in the cafeteria at Kesselring and hiding out in the lost & found at Gore. He also has a Valentine’s Day birthday twin at Kesselring. It was fun to roast & toast them with a funny Valentine’s/ birthday cake for everyone to see. Sorry for your loss!

Sandy will be missed, our thoughts and prayers are with his family at this time. He was a very beloved member of our Hometown Thanksgiving family. Hilary & Kimberly Tompkins

Al you left us with so many wonderful memories. Our deepest sympathies to your family. We will miss you our dear friend Sandy!

Sandy you will be so missed! You were like my 2nd dad when it came to our family ski weekends.

Al and I 1st met when we conducted on the Polar Express. We put that one to bed and then went on to Kesselring. We were still actively working on that project when Al's years long fights with various cancers finally overcame him.
Al was an expert in the locations of culinary treasures throughout Warren County and new everyone. He guided me thru many different experiences probably the most memorable being several months ago at Johnny Rockets where on learning Al was there for lunch those...

Our deepest sympathy to you and your family. Although it has been awhile since we have seen you, we have fond memories of when we were neighbors and of times spent together. Please know you are in our thoughts and prayers.
Bev and Ben Davis

Very sorry for your loss.

Sandy you will be missed! We could always count on you for a smart comment and a smile! I will miss you in Rotary. Rest In Peace. Condolences to your family.

Al was a great friend and colleague when he and I worked at Sears in the electronics department. Al knew how to make all of us "younger" guys laugh, and taught us to not take life too seriously. It was always a good day when you saw him "sauntering" down the aisle, past the big appliances to our corner of the store. We always ran into each other around town, and always had to catch up on what life was doing. I'll miss running into him, his friendly jabs, and good spirited...

Get email updates about Alexander Katz delivered directly to your inbox.

Born in Manhattan and raised in Brooklyn, Al fondly recalled childhood adventures of exploring the city every Saturday without parental supervision as well as swimming at Brighton Beach and engaging in shenanigans at Coney Island.

He graduated from Rhodes Preparatory School in 1959 and attended New York University.

Al’s love of skiing and socializing prompted him to join Ski Spree, which allowed him to escape the city during the winter months. Through Ski Spree, he met Angela, also a member, at a dude ranch in the Catskills. They were married in 1968.

Relocating to Glens Falls in 1969, Al began a career as an insurance agent, which was like  hitting the proverbial jackpot because it enabled him to kibbitz with people from all walks of life.

After nearly 30 years, he switched careers and worked for 10 years in sales at The GreatEscape, another job that paid him to talk with people.

When Al “retired,” in addition to being a conductor on the Saratoga and North Creek Railway’s Polar Express, he became a fixture at Gore Mountain. First working as a greeter, then as a starter for Nastar, he reached his forever home running the Lost and Found. Working at Gore enabled him to remain an active participant in the pursuit of joy that ski culture inspires.

Never one to sit still, Al was as generous with his time as he was loquacious. He was a member of the Lake George Chamber of Commerce and Lake George Rotary Club. Over the years, he volunteered with Meals on Wheels, provided rides to doctor’s appointments for those in need, coordinated transportation for the Glens Falls Hometown Thanksgiving and was a fireman with the Queensbury Central Volunteer Fire Company.

They broke the mold when Al was born and his colorful personality will be fondly remembered. Al is survived by his wife, Angela Katz; daughter, Elissa Valenti; and grandchildren, Max and Sasha.

Special mention must be made of the Oncology department at Glens Falls Hospital, especially Dr. Gillani, whose talents gave Al many extra years. The family also extends heartfelt appreciation for the care and compassion provided by Karrian and April with High Peaks Hospice.

A private service will be held at the convenience of the family. Messages of condolence andsympathy may be sent directly to Baker Funeral Home, 11 Lafayette St., Queensbury, NY12804 or through www.bakerfuneralhome.com.