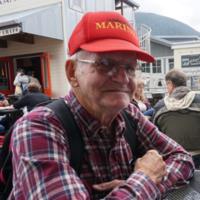 Sorry to hear about Alvin. He will surely be missed. My sympathy to each of you

Doris, Ed, Dale, Crystal, so very sorry for your loss.

Get email updates about Alvin Blumanhourst delivered directly to your inbox.

Alvin was born on November 18, 1929 at Sumner to Alfred and Rachel Blumanhourst. Alvin attended school and graduated from Sumner High School with the class of 1947.

After graduation Alvin farmed with his father until October 1951 when Alvin was drafted and volunteered to join the Marine Corps. Alvin served 2 years during the Korean conflict with 13 months spent in Korea.

Alvin married Doris Ester Furby at Amherst on December 16, 1951. Alvin and Doris lived in Southern California while he was stationed stateside in the Marine Corps.

After the service Alvin returned to Nebraska and worked in various agricultural pursuits until he started at Farmland Service COOP in Gothenburg. Alvin lived on a farm north of Gothenburg where he farmed and raised livestock while continuing to work for COOP. In 1979 Alvin and Doris moved to Cozad where he managed the COOP Fertilizer Plant until his retirement in 1992.

Preceding him in death were his parents and brother Alfred Blumanhourst.

Memorials are suggested to the Cozad VFW Post 890. Services will be held Wednesday, June 2, 2021 at 10:00 a.m. at the Berryman Funeral Home Chapel. Burial with Military Honors will follow at 1:00 p.m. at Fort McPherson National Cemetery near Maxwell. Visitation with family present will be Tuesday June 1, 2021 from 5:30 p.m. to 7:30 p.m. at Berryman Funeral Home.