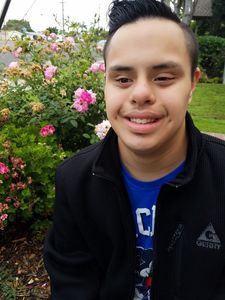 We will miss you primo, I will love and adore you always.. hearing everyone's memories makes me smile and I wish I could of been there and they make me feel closer to you.
Erika, Jacob and Azee, our sincere condolences, may your hearts heal with time, I am always here for you, With Love Vivian and Family

We love you Andrew you were our sunshine

Beautiful words for a truely beautiful person.
I loved how Andrew gave his input on every conversation and how he did it, with a lot of enthusiasm and assertiveness. And of course who could forget his love for the Lakers. I can only imagine Drew playing ball with Kobe.
Our family will not be the same without him. He will how ever continue to live thru our memories.
Andrew you are truly righteous and will live forever in the New Kingdom.
With all my love Melissa

Andrew Isaiah, "Drewski" or "Ayoo" as he pronounced his name on occasions, was born on March 5,1997, in Lakewood, CA, and was called to his eternal home December 26, 2021. Andrew's arrival came with much anticipation. What we didn't know was that his arrival would be met with a series of complications that no experienced parent could ever prepare for. Being diagnosed with down syndrome, suffering meconium aspiration, flatlining three times and put on ECMO all just under 24 hours after birth made his prognosis exceptionally unpromising. Yet, our Drewski revealed from that moment the strength his will to live was made of, and how his purpose in life would be much greater than any obstacle life could throw at him, and the impact his existence would have on some of the people he would have contact with in his lifetime. One of his one on one aides, Tim, said, "Man, even with the challenges he was faced with he had the most charismatic personality that just made you enjoy his company. He holds a very special place in my heart because, although, even in a short amount of time, how he impacted me." We recalled the time when Tim invited us to an NBA summer league game at LBSU and Drew strolled on the court chasing after the basketball he had been dribbling. He brought the game to a pause as he ran across the court with ball in hand determined to make a shot. One of the players picked Drew up to help him make his shot while the crowd eagerly cheered him on. Tim hurried behind him to get him off the court after he made his 3rd shot, but Drew wouldn't make it an easy task. Tim added, "I have a picture of us when I went to pick him up off the court. Man, that was a memory I'll never forget because it was so organic and so ANDREW (LOL) as small as he was at the time, he had and has the heart of a lion. There was nothing he felt he couldn't do. When I think of him that's what I think of, how ambitious he was and didn't allow himself to have any limits."
In spite of the countless challenges that doctors predicted for Andrew's future, his fearlessness and absolute love for life gave him the drive he would need to overcome many of those challenges. The subject he struggled with most was verbal communication. However, his gift of communication went beyond the use of words. He was the kind of soul that you would have to learn to communicate with through EMOTION. Jennifer, one of his teachers at Hope High, shared one of her memorable interactions with Drew. She said, "He was super empathetic without being told. He would do a kind gesture or put his hand on your shoulder or just give you a look that let you know he recognized how you were feeling. It was magic. I remember when my bff and grandma passed in the same week. I don't think it was a moment when I was talking about it, but I was having feelings on the inside. He came over to my desk, looked at me, made a few vocalizations and then put his hand on my shoulder. It was such a magical moment."
A considerable reason why I believe Andrew made such an impact on so many people that had the chance to interact with him was because we were forced to look within for a deeper understanding. Andrew's language is pure, selfless LOVE that has superhuman intuitive abilities. You could physically feel when your frequency connected with his. Imagine what a wonderful world it would be if we would follow his example with each other. Too many times we take our words and ability to communicate for granted and neglect to use our words beneficially.

I always said Drew entered planet earth on Comet Hale-Bopp, visible from earth in Mar of '97, since his arrival was so uniquely tumultuous. And now he hitched a ride on Comet Leonard with his departure on Christmas morning, and to no surprise since everything Drewski ever did was extraordinary.
Have fun soaring through infinity and beyond, my love. You're safe now from all harm. You no longer have to watch your step.