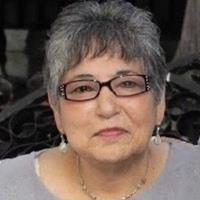 I absolutely loved this woman.. I am so grateful to have met her and had the honor to meet this interesting.. fish story telling.. adventurous person.. will miss her smile and hope to see her again.. Bertha RN.

She was a happy women with a beautiful smile and loved her family. She will be missed and will always be one of my sweetest sisters. May she rest in peace.

GIve a hug to Jesus and then my brother. Love you forever tia!

My pastor annie the day you came into our lives was life changing. You were an amazing friend , pastor, momma bear, but most of all you were and still are my sister in christ. You were there when I needed you the most and my everyday to my Chinese eating lunch buddy oh how I miss our days doing things together. You taught me so much and loved me to no end like I love you to no end. You are one special lady to us you took us under your wing and showed us the love of God again and taught us to...

To a good person that was my classmate, Rest In Gods’ Peace

Get email updates about Anita Martinez delivered directly to your inbox.

Aunt Annie as we all knew her, was a resident of McMullen County and graduated from McMullen High School.  After graduation, she moved to San Antonio, Texas to attend college where she received her Associate's Degree. She then moved to Monahans, Texas where she lived for several years. Annie then went abroad to Germany where she lived for 10 years.

She managed the Headquarters Stars and Stripes Bookstore in Darmstadt, Germany.  She assisted the Military Chaplain in Crailsheim, Germany with the Korean Church.

She returned to the United States and made her home residence in Monahans, Texas.  She became the Clerk/Administrator for the Office of Juvenile Probation in Monahans.  She received her bachelor’s degree in criminal justice from the University of Texas - Permian Basin.

Anita Martinez (Annie) pastored the Christian Assembly Church in Monahans, Texas.  She made various missionary trips to visit orphanages in Chihuahua, Mexico.  After retirement from Juvenile Probation, she moved back to her hometown of Tilden Texas to be closer to family.  She also Pastored the Church of Harvest in Tilden Texas.

Anita (Annie) is survived by her brother Matilde Martinez Jr from Corpus Christi, sister Louisa Lee from Tilden, brother Felipe Martinez from Three Rivers, sister Celia Serrata from Tilden, sister Angelita Serrata from Killeen, and brother Arturo Martinez from Houston.  She also was beloved by many nieces and nephews.  She not only had her family but many friends who she loved and loved her.  She was a mother to so many of her nieces and nephews.

Anita (Annie) will be missed by so many but she left a legacy of stories and laughter to all who met her.

Services for Anita are scheduled for Wednesday, September 22, 2021, starting with visitation from 8:00 am to 11:00 am followed by a chapel service at 11:00 am, all at Hurley Funeral Home, located at 118 W. Oaklawn Road, Pleasanton.  Interment will follow at Hilltop Cemetery in Tilden, Texas.