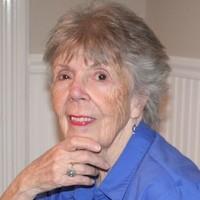 Get email updates about Barbara Klein delivered directly to your inbox.

Barbara Louise Klein, age 85, became a resident of Heaven on Saturday, March 7, 2020. Previously a longtime resident of Carol Stream, IL, Barbara moved to North Texas in March of 2017 to be near her daughters Victoria and Pamela.

Barbara was born September 7, 1934 to Earl and Mary Ertzgaard in Minneapolis, MN, but later relocated to the Chicago area and settled in Oak Park, IL where she spent her childhood and early adult years. After graduating from high school in Oak Park, she was employed as a secretary and met the love of her life Edward Klein. She was married to Ed for 44 years prior to his death in 2003. She will be remembered by her cheerful attitude, encouraging and supportive spirit, wry sense of humor and love for the city of Chicago.

In lieu of flowers, the family requests donations to the Texas Chapter of the ALS Association.