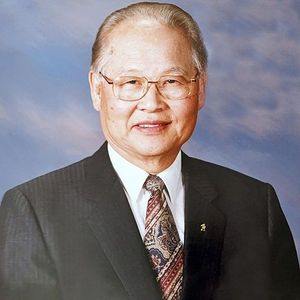 What a blessing and man of God. His life was a life of service and call. I wish I had know him. Love, blessings and deepest sympathy.

Chan Young Choi was born in Pyongyang, Korea. During the Korean War, he served in the South as a translator and chaplain. He was the first missionary commissioned and sent abroad after the end of the war by the Presbyterian General Assembly of Korea. He and his wife, Kwang Myoung Kim M.D., began their early married life in Thailand. Chan Choi served as the pastor for the Second Thai Church of Bangkok and later as the Thai Bible Society Secretary. Next, he joined the American Bible Society in New York as the Director of Denominational Relations. Eventually, Rev. Choi returned to Asia to live in the Philippines and later Hong Kong as the Director of Asia Pacific Distribution for the United Bible Societies. He finished his career as the Asia Pacific Regional Secretary of the United Bible Societies, overseeing almost thirty national Bible Societies in Asia, Oceania, and the Middle East.

His successor as Regional Secretary described him as a man who "spoke softly and kindly, with warm authority and loving passion for the Bible." Rev. Choi fluently spoke four languages. He was a gregarious man who enjoyed fellowship with many friends and colleagues throughout the world. Rev. Choi encouraged each Society to focus on local translation and publication to reach the various subregions and dialects within their respective nations. In addition, he expanded outreach and pioneered methods to serve people with limited literacy. During his 30 years with the Bible Society, his proudest achievement was the establishment of the Amity Printing Press in Nanjing, China, in 1987. This printing press is one of the most active globally, having produced over 200 million Bibles in over 170 languages (as of 2019).

In addition to a Masters in Education degree from the University of Pittsburgh, he received three honorary Divinity Doctorate degrees bestowed by the Southern California Graduate School of Theology, Choen Ju University, and the Presbyterian Seminary of Korea.

Two early church films featured Rev. Dr. Chan Young Choi. "This High Calling" was a film about his mission commission, produced by the United Presbyterian Church of U.S.A. in 1954. Then the Canadian Bible Society, in 1970, filmed the sharing of the gospel with Buddhist monks in "Better than Fine Gold."

He retired to California in 1992, where he took on his second career as an elder missionary encouraging younger missionaries. He volunteered at Fuller Theological Seminary as Director of Korean Studies. He engaged with Torch Trinity Seminary and the Global Evangelization and Development Association. He inspired the "Golden Age Missionary Movement," which encourages seniors to participate in mission work. He spent his final years in Los Angeles devotedly caring for his spouse of 63 years as she declined and eventually passed in 2017.

We thank Rev. Ken Choe and the extended church family at Ttokamsa Mission Church for enveloping Rev. Dr. Chan Choi in many years of spiritual engagement and love. We thank Dr. Peter Im, his dear friend, for bringing to print "My Cup Overflows, A Biography of Chan Young Choi," which will keep and refresh our memories.

He is survived by his brothers, Chan Myoung Choi (Sung Hee) and Chan Joo Choi (Young Ok). He will be greatly missed by his children, Sam (Kathryn), Helen (John), Miran (Dan), and Dan. His seven grandchildren will fondly remember him: Christina, Steven (Melanie), Andrew, Jeffrey, Mija, Derrick, and Emily.

A celebration of life service will take place on Tuesday, November 9, 2021, at 3:00 pm, at Forest Lawn, Hollywood Hills, in the Chapel of the Hills.
You are invited to view the Funeral Service for Chan Young Choi.
Date: Tuesday, November 9, 2021
Time: 3:00 p.m., Pacific Time (PT)
Location: Church of the Hills
Password: Choi
Click on the link to view (cut and paste to your browser):
https://venue.streamspot.com/event/MjkwMDU1MA==