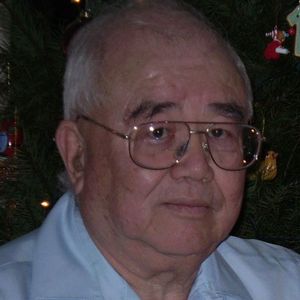 Charles Frederick Pangelinan, a beloved husband, father and grandfather, passed away on October 10, 2021, at the age of 84. In addition to being a voracious reader, Charles loved studying history and current affairs, watching classic movies from Hollywood's Golden Age, and listening to his vinyl record collection featuring music legends, such as Ella Fitzgerald, Nat King Cole, Tony Bennett and Frank Sinatra. Over the years, Charles particularly enjoyed his many weekend trips to Las Vegas. However, his greatest joy was spending time with his wife of 63 years, Leonila, his children and grandchildren.

Charles was born on December 24, 1936 in Agana, Guam, to Maria Pangelinan Munro and Antanacio Blas. He was just four years old when the Japanese invaded the island of Guam on December 8, 1941, just one day after the Pearl Harbor attack. Throughout the years, Charles would often speak about his harrowing experience as a young child during the Japanese occupation in World War II.

In 1950, at the age of 13, Charles went to live with his aunt, Matilde Pangelinan Blaz, in Compton, California. He graduated from Centennial High School in 1956, and moved back to Guam the following year. Among his first jobs was as a secretary for Naval Air Station (NAS) Agana. Charles then transitioned to a career with the U.S. Post Office in Agana.

During this time, he began dating Leonila "Lila" Cruz of Barrigada, Guam. The couple eventually married on August 2, 1958. Charles was drafted into the Army in 1960, while Lila became pregnant with their first child. On February 3, 1961, Charles and Lila welcomed a daughter, Germaine "Ginny." After suffering a serious injury during military training, he received an honorable discharge from the Army. That same year, Charles and his family moved into their first house in Maina, Guam.

In 1963, the family relocated to the mainland, living in Compton. They ultimately made their permanent home in Cypress, California. On March 4, 1965, their son, Timothy, was born followed by a second daughter, Vitisia "Vi," on September 10, 1969.

Charles spent more than 30 years working for the U.S. Postal Service, ascending the ranks from a mail carrier at the Compton Post Office, to a quality control analyst for the Los Angeles Bulk Mail Center in the city of Bell. He attended Cypress Community College part time, where he earned an associate of arts degree in business. In 1991, Charles retired from the U.S. Postal Service.

In lieu of flowers, the family requests a charitable donation to the American Cancer Society in Charles' memory.