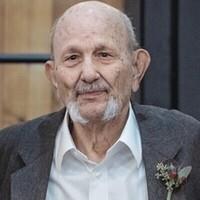 Dear family, I was sorry to hear of your loss. I always enjoyed working with Mr. Sangalli at Red River Army Depot.

Get email updates about Charles Sangalli delivered directly to your inbox.

Mr. Sangalli was born February 20th, 1931 in Genoa, Arkansas and lived in Texarkana most of his life. He was retired from Red River Army Depot and was a Methodist. He was a Veteran of the United States Marine Corps. and served in the Korean War where he was a two-time Purple Heart Recipient.  Papa  enjoyed playfully  agitating his grandchildren and great grandchildren,  which they will greatly miss. In his earlier years he was an avid outdoorsman who enjoyed  hunting, fishing, and camping. The most important part of his life was spending time with his family and spoiling his grandchildren and great grandchildren. You never knew what the heck he was going to say or do next. Charles was a very generous and kind person who loved to make others laugh and was a strong supporter of Veterans and his Country.  He was preceded in death by his wife of sixty-four years, Wanda Joy Burke Sangalli, one brother, Gerald Sangalli, and one son-in-law, Freddie Thomas.

He is survived by one son and daughter-in-law Mike and Rhonda Sangalli of Texarkana, Arkansas; and by one daughter Vickie Sangalli Thomas of Fouke, Arkansas; two sisters, Betty O’Neal Culling of Bonham Texas; and Sharon O’Neal  of Grove Oklahoma; four grandchildren Wendi Sangalli Smith and her husband Randall and their daughter Savannah; Michael Shane Sangalli and his wife Kerri and their sons Will and Carter; John Fred Thomas and his wife Jessie and their two daughters Jayleigh and Julia; and Travis Wayne Thomas and his wife Katelyn and a number of friends and other relatives.

The family would like to thank his Hospice Care Team for the mutual respect and love shown between Mr. Sangalli and his caregivers.