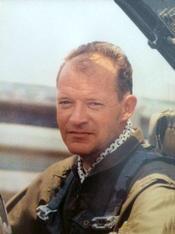 I was sad to see notice of Goertz's LAST FLIGHT in the DAEDALUS FLYER. It was a pleasure to meet, serve, and associate with Bob, while with the 509th FIS, Clarke AFB ,1968-70. Our paths crossed too few times after that. I can still see his quick smile and hardy chuckle. A SOLID SOLDIER IN EVERY CATEGORY.

Such a shinning *Light* to so many! With Hearfelt sympathy, please know our thoughts and prayers are with the Goertz family at this time of loss. Praying for friends to comfort you, faith to uphold you and loving memories to carry you through. Love, Cynthia Kelly Branson, John and family

Wonderful memories during our times together at Tyndall AFB, Florida, both at work and at play. True friend to everyone and great family man. Our three daughters, Catherine, Cynthia & Amy, had one of the great experiences of their lives when our two families went shark hunting together. We had planned to be there today, but it was not possible. Our thoughts are with you all during his life celebration. With love, Louise & John

Amy, Bruce, and Maggie, this obituary is so filled with all the qualities one would want to have said about one both during life and after passing. Lucky for each of you to have had a dad, father-in-law, and grandpa like you did in Col. Robert Goertz. All of him is so woven as a tapestry in each of your lives.

COL GOERTZ WAS MY SQUADRON COMMANDER WHILE WE WERE STATIONED IN ICELAND 74-76. SUCH A WONDERFUL COMMANDER WITH TONS OF INTEGRITY. COULD NOT ASK FOR A BETTER PERSON TO BE YOUR BOSS. SUCH A CLASSY GUY. IT WAS IN ICELAND THAT WE WERE GIVEN SOME SOUR DOUGH STARTER THAT JO HAD BROUGHT TO ICELAND. AFTER RETIREMENT, I KEPT IN TOUCH FOR A NUMBER OF YEARS BY PHONE. ALWAYS A PLEASURE TO VISIT WITH. YOU GUYS HAD A WONDERFUL MOM AND DAD. MAY THEY REST IN PEACE.
IT IS WITH EVERY GOOD WISH, AND KIND...

I was so sorry to hear of Bob's death. I knew him in Iceland. When I married Charlie, Bob and Jo took me in as part of the "fighter family" and we remained friends for years after Bob retired the first time. He was Charlie's mentor/role model and a tribute to the AF; however, nothing meant more to him than his family. I remember times when the pilots were riding a bathtub down the steps, jumping out of the second story window of their quarters playing Captain America, the annual...

Undoubtedly one of the best bosses I ever worked for! Besides that, he was a great human being; he had integrity, empathy for others, and a sense of humor. He will be missed.

You guys had a wonderful dad and I had a good friend. From the days at the Survival School to the land on the lake in Idaho, your dad was always my dear friend. An inspiration in all undertakings and an outstanding Air Force officer. May he rest in peace.

Our beloved Dad, our Pop, our Grandpa and Bubba - Mr. 102 - has taken his final flight. He slipped the surly bonds of earth and danced the skies on laughter-silvered wings and has now gone West. He was born in Beatrice, Nebraska, to John and Margaret (Claassen) Goertz on December 28, 1930. His family moved to Seattle when he was young, but he returned to Nebraska every summer to work on his Uncle Menno's farm. After graduating from West Seattle High School, he went on to the University of Washington, where he met the irrepressible Jo Wahlstrom. He graduated in Forestry and worked at a logging camp in the Olympic National Forest, then joined the Air Force in 1954. After earning his wings, he returned to Seattle to marry Jo in 1956. His career as a fighter pilot took them across the country and around the world, but even when he was far from home, his heart remained with Jo and their four kids. He forged friendships that would last a lifetime, and several of 'the boys' threw in together to buy a piece of land in the wilds of Idaho on Lake Pend Oreille. There was nowhere Dad loved being more than the lake. After serving as the Survival School's Operations Officer at Fairchild, Bob retired from the Air Force in 1979. Not one to sit at home and twiddle his thumbs, Bob joined fellow air jocks Jim Jordan, Frank Faha and Larry Haight to form Eagle Mountain Homes, where they brought their hard work and demand for excellence to custom home building. After his second retirement, he built one last home for him and Jo on ten acres surrounded by wheat fields that surely reminded him of his Nebraska days. When Jo died after 54 years of marriage, a piece of his heart went with her, but he never lost his fighting spirit. In words and deeds, he set the standard for how to live your life. His friends recall he lived by 'the Code' - he asked no more and gave no less than honesty, courage, loyalty, generosity and fairness. We will remember our Dad for his high standards, integrity, wit, and the rock-solid knowledge that he would be there for us no matter what. After giving his children the remarkable gift of one last Christmas together, he passed away at home on his 82nd birthday, December 28, 2012, surrounded by love and family. His family thanks Cory Johnson for the respect, honor, and excellent care he gave our Dad and for going above and beyond to make him happy in his final days. He will be sorely missed by his children, Mike Goertz, Sandy Jacques, Kathi (John) Johnson and Amy Goertz (Bruce Lambrecht); his grandchildren, Dillon, Ashley, Bennett, Tanner, Riley, Kara, Ian, Tyler and Maggie; his lifelong friends; and his faithful dog, Kooper, who remained by his side to the very end. We are better for having known Robert David Goertz. Throw a nickel on the grass.A memorial service will be held at Heritage Funeral Home on Saturday, January 26, 2013, at 2:00 p.m., with a wake to follow at Bob's house. Call Kathi (509) 954-3724 or Amy (206) 949-9663 for more information.