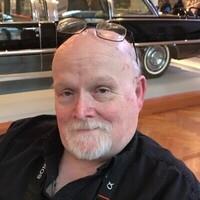 Bob, I know it must be hard to always be the one left behind. We just finished watching the service. So sorry for your loss. We miss you.

Bob, it sounds like he had a full and interesting life. I am sorry for your loss. He looks like you, not a bad thing.

So sorry to learn of David’s passing. Will always remember his great vocal abilities

A beautiful tribute to David. He was indeed a very friendly person. He will be missed by many. Cousin, Marilyn.

I'm writing this with great sadness.
A true friend who always made me laugh. I will miss you.
.....Darlene CHS floor 9

My sweet dear friend, I miss you. My heart has a big hole in it.

I will always remember David filling the halls of DHS at every opportunity with song and laughter. Kind, courteous and filled with happiness. He will make the Angels sing.

Get email updates about David Curtis delivered directly to your inbox.

David was born on Friday, April 13th, 1945 to E. Elizabeth and William P. Curtis who predeceased him. He is survived by his brother Robert W. Curtis (Bob).

David's early years were lived in Dearborn, Michigan. His elementary schooling was spent as a student at the Greenfield Village Schools. In 1963 David graduated from Dearborn High School. Following high school he attended the University of Michigan majoring in vocal music. He received his Bachelor and Master's degrees from Eastern Michigan University. Upon graduation David taught sixth grade at Lincoln Consolidated Schools where he also served as president of his local education association.

After teaching David entered a life in food service in the Ann Arbor area. He worked at Jewish summer camps as chef, often entertaining the campers with pre-dinner mini-concerts, usually selections from opera. In Ann Arbor he worked in many local food establishments as bar tender, maitre'd at a newly opened Ann Arbor hotel and several restaurants as chef. He was the chef at the Anna Bach Home (for elderly women) where he prided himself on providing the ladies proper diets and for many reducing their need for medication. He was chef at three different University of Michigan Sorority Houses. He then worked as a deli technician at a local Meijer's store until a car/motor scooter accident made it impossible to continue working.

David was a consummate supporter for human rights. He supported the ASPCA, the Huron Valley Humane Society, and assorted gay and civil rights organizations, including holding large benefit barbecues each summer.

All who knew David agreed he was honest to a fault, a good listener and spent his time in the present. David's energy, positivity and character added so much flavor to the room, everyone loved him.