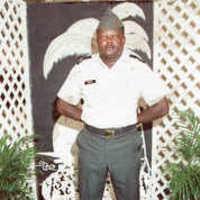 Mr Terell has always been the life of any party, he will be truly missed. So many good memories with you and Tan. I will miss you dancing to your favorite tune. RIp my dear brother..love always your forever sister Sherry

Iam going to miss you cuz

With deepest sympathy to the Family on the passing of Mr. Dean Terrell . Keep the faith Family. We will miss him. Rest in Heaven my Brother.

Get email updates about Dean Terrell delivered directly to your inbox.

Sergeant Retired Dean Terrell, formerly of Louisville, GA, passed away on Friday, February 7, in South Bay, Florida.  Dean was born on February 28, 1955, to the now late Earnest Mitchell Terrell and Annie Lee Gibbons Terrell.  His early and formative years were spent in the Hardeman Springfield Community.  He was a former member of Hardeman Springfield Baptist Church and a 1973 graduate of Louisville High School. Following graduation from high school, Dean worked for a short period at Thermo King, Corporation in Louisville; heeding his country’s call, he enlisted in the United States Army on April 6, 1974.    After more than twenty years of stellar service, he was honorably discharged from active duty in the United States Army on December 24, 1995.  He was born and raised in a loving home.  He was surrounded by his parents, who have since gone from labor to reward, and his many siblings, three of whom have been called to eternal rest.  His sister Mary Ann Terrell and brothers Joe Lewis Gibbons, Sr., and Willie James Terrell preceded him in death. Dean was a fun-loving family-oriented man.  He enjoyed being in the company of his relatives and visited his home community when his health allowed.  He last visited this past summer; however, he was in declining health. Dean is survived by his wife Tanginiki Terrell, whom he married on March 21, 1999.  She is left with wonderful and special memories of the life they shared together.  Left to forge on with the earthly love and support of their father are his three daughters, Mykeria Terrell, Tiola King, and Shantearia Williamsall of South Bay, FL.  He leaves his sons, Dean Terrell, Jr., and Detrick Terrell South Bay, FL; Mytris Jones (Sylvia), and Jontavious Huggins, Tampa, FL.  Dean was a special and loving grandfather to his seventeen grandchildren: Macayla, Cameron, Isaiah, Ferrari, Xin, Darius, Jourdyn, Harmani, Alijah, Lay’Loni, Denmin Mytris III, Jacob, Major, Micah, Heaven, and King.   Dean will be forever loved and forever missed by his remaining siblings: Christine (Ronnie) Burton; Donnell (Angela) Terrell; Earnest Terrell, Jr., and Diane Terrell all of Louisville, GA;  Robert (Priscilla) Terrell, Davisboro, GA, and Earnest Roger (June) Tolbert, St. Petersburg, FL. Dean’s uncles, Clarence (Cora) Gibbons, Brunswick, GA; Willie Lewis Terrell, Nashville, TN; Henry Frank Terrell, Atlanta, GA; John (Mamie) Terrell, Stockbridge, GA; Harvey (Bernice) McCall. Augusta, GA; his aunts Sarah Wells and Suluer Wells, Louisville, GA; and Pauline (Willie) Williams, Miami, FL, will be forever deprived of Dean’s earthly presence. Additional survivors include his mother-in-law, Joann Williams, Belle Glade, FL; sisters-in-law, Tequesta Hill, Erica Hill and Latoya O’neal, Belle Glade, FL; and brothers-in-law, Leroy Williams, Miami, FL and Roy Lee Hill, West Palm Beach, FL. Dean’s retirement often found him in the company of his nearest and dearest friends, Clyde Brooks, Paul Buxton, George Roberson, Cullen Cromer, Andrew Mann, Stanley Johnson, Larry Jackson, Keith Lynd, Grady Brown, and Willie Alexander.  Dean Leaves as additional array of cousins, other relatives, sorrowing friends and other acquaintances.