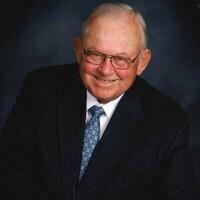 Jan, So sorry to hear about Don's death. Joy sent me information so I could read his obituary. He sure led a wonderful life. I am glad you had so many years together. I know you have many great memories that will sustain you through the years. Take care. Sharon

Dear Jan & Family,
Please accept my heartfelt sympathy for your loss of Don. I shall remember forever the time we spent with each other

Don was a great friend!

We played a lot of golf together over the years, and unfortunately, I had not seen Don in a number of years after his retirement.

I credit Don with starting the Critical Access Hospital Program nationally as well as for the State of Kansas.

He saved a number of rural hospitals from closing by this single accomplishment.

Rest in Peace Don - and some day I hope we can hit the links again in a better place!

Jan, I am so sorry to hear of Don’s passing. My parents so enjoyed their “Iowa” connection with both of you. I will keep you and your family in my prayers.

Dear Jan and Family,
We were deeply saddened to learn of Don's passing. Don was a true gentleman and an asset to the Kansas and Topeka communities in so many ways. He will be missed. Don made the world we live in a better place in so many ways. His life of service is certainly to be admired and emulated. Please take comfort in your many good memories of Don and a life truly and fully well-lived. And please accept our sincerest condolences!

Jan and Family, we were so sorry to hear about Dons death. He always had such a beautiful smile in church and was so friendly. We will remember you all in our prayers. Tom and Barb Severn

"Brother B" and Family

Jan and family, so sorry to hear of Dons death. Know you are in my thoughts and prayers.
Rita Hulsing

I was saddened to learn of Don’s passing. He was both a friend and colleague. Don was a state and National health care leader and a mentor for many state association execs that had the good fortune to know him. I have fond, cherished memories of SHAEF meetings with Don and Jan.

Get email updates about Donald "Don" Wilson delivered directly to your inbox.

Don attended and graduated from Cedar Falls High School. While there, he was very involved in athletics, lettering in football, wrestling, track and baseball in his junior and senior years. Don went on to attend and graduated in 1962 from the University of Northern Iowa earning both a B.A. and M.A. in Business. While attending, Don wrestled and lettered in his junior and senior years and participated in the 1962 national championships in Stillwater, Oklahoma. His UNI team placed 5th in the nation.

He began his career in teaching in Racine, Wisconsin for three years and at Ellsworth Community College in Iowa Falls, Iowa for four years. In 1969, he became the administrator for the Ellsworth Hospital in Iowa Falls. In 1978, he joined the Iowa Hospital Association as Vice-President of finance and planning. In 1982, he became President of the Kansas Hospital Association, a position he held for the next 22 years. Don received the American Hospital Association Board of Trustees Award in 2003. He retired in December of 2004. After retirement, Don worked part-time as a health care consultant, and he served on the boards of the Marian Clinic and Via Christi Health in Wichita and was a member of the Topeka South Rotary Club where he was a Paul Harris Fellow.

Don was very active in his Catholic faith and was a founding member of Christ the King Catholic Church and a 50-year member of the Knights of Columbus.

His children and grandchildren were his pride and joy. He enjoyed golf, fishing and was an avid sports fan. Fishing was indeed a great passion, involving many adventures from the Amazon in Brazil to the wilds of Alaska. However, some of his fondest memories were vacations at the family cabin in Minnesota and fishing trips to Canada with his buddies. After his retirement, Don and Jan traveled to Europe with good friends and especially enjoyed their trip to Norway. In his younger years, Don was active in Boy Scouts and achieved the rank of Eagle Scout.

Memorial contributions can be made in Don’s memory to the Eleanor Wilson Memorial Endowed Scholarship c/o UNI Foundation Financial Services, 121 Commons, Cedar Falls, IA 50614-0239 and/or to Christ the King Catholic Church. Contributions can be mailed or left with the funeral home. To share a memory or to leave condolences, please visit, www.brennanmathenafh.com.