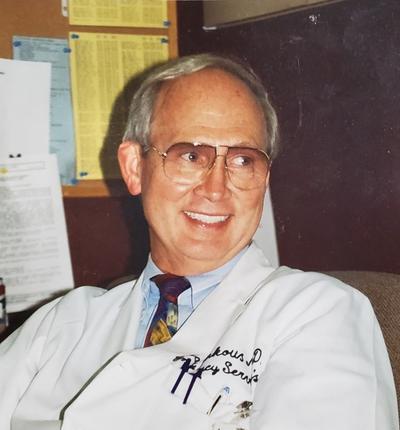 Dr. Clay Linkous remains as my daily example of faith among us Purple Foxes and of love to our Donovan family. In 1969 at Marble Mountain, RVN Clay Linkous resided in the same Purple Foxes "hootch" with me, Don Macharg, Tom Nequette, and Bob "Deli-Man" Armenio, KIA 27Jul69. DOC Linkous flew with us mentored us and served with us Purple Foxes in combat medevac missions 24/7 from Aug '68 to Sep '69. He was a giant example of Heroic proportions.
We will forever hold Clay...

Dr. Linkous was one of the first doctors I worked with at LRMC in 1998 in the ED. Those were the good times at work and he was fun to work with. Funny was he wanted you to think he was tough during ACLS and scare ya to death but he was a softy. He was missed when he left the ED.
A great doctor and family man. Prayers and peace to all who loved him.

Deanna and myself (Richard Shick) are both so sad for
The passing of Clay, he did so much to help both of us over the past 25 plus years, we will truly miss him.

Clay has had a long battle and I know your heart is broken and I know your pain. I want you to thank God when times are really sad for bringing him into your life and the time you had together. You and I were so blessed to have had such good and caring husbands as my Larry and your Clay in our lives. My Family is your Family and we love you so much. Please tell Clay's children my thoughts and prayers are with them. Love Susie

Heartfelt sympathies to Beverly and all Clayton's family and friends

Get email updates about Dr. Clayton Linkous, Jr. delivered directly to your inbox.

Clayton was born on June 7, 1940 in Hazard, KY. He grew up in Holden, WV and graduated from Logan High School in 1958. He completed his undergraduate degree at Virginia Polytechnic Institute, then received his Medical degree from the West Virginia University, completed residency at Bethesda Naval Hospital.

Dr. Linkous practiced Family and Emergency Medicine for over 50 years. He was an Eagle Scout, Lieutenant Commander in the United Sates Navy, Vietnam Combat Physician who served with the USMC, Life member of USMC/Combat Helicopter Association, a Flight Surgeon for the U.S. Navy Blue Angels, and 32 Degree Freemason of Scottish and York Rites.

In lieu of flowers, the family has requested donations be made to: St. Jude's and/ or Lions Eye Institute. Arrangements have been entrusted to Seigler Funeral Home, Inc., Mulberry, Florida.