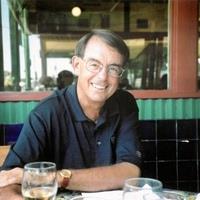 It's hard to put my memories of Fred in writing. How do you capture the years of laughs with my golf partner, my travel partner, my friend. His laugh was infectious, and I loved to get him going! We shared a love for Mt.Pleasant, and lots of parties and golf. He was a truly unique man, and I am so happy to share in his memory.

I worked for Dr Anderson for 25 years. During that time, he helped me with so much knowledge while I attended Ferris obtaining my Optometric Tecnician Degree and certification. May you RIP and my prayers to the entire family

Kim and Eric, We are so sad we can’t be with you on the 17th as we will be in Utah visiting our son. Your dad was such a special man in so many ways.and one of George’s very favorite golf partners! We have many memories of him we will continue to cherish. We send our condolences to both of you and your families. George and Gail Torreano

Dad, You we’re my light and my anchor. I feel a little lost without you, but I know you are with me in spirit. Fly and be free, Dad.
I’ll love you FOREVER!

I worked for Dr. Anderson for many years. I will always remember the things he taught me about optometry and about life. When we attended conferences he was always the life of the party. Rest In Peace my friend.

It was a privilege to become a partner with Fred in his optometry practice. We would met daily at lunch to sort out problems and had many dinners and golf outings together that I remember -Good times. RIP Fred

Get email updates about Dr. Frederick Anderson delivered directly to your inbox.

Longtime Mt. Pleasant resident, and retired optometrist, Dr. Frederick Lewis Anderson, was born on April 25, 1937 and passed away Monday, August 10, 2021, in Jacksonville Beach, Florida. Fred grew up on a fruit farm in Ada, Michigan and graduated from Greenville High School 1954. Fred attended Grand Rapids Junior College before transferring to, and graduating from, Illinois College of Optometry in Chicago, Illinois. Upon obtaining his Doctor of Optometry degree, Fred joined the United States Air Force as a 2nd Lieutenant where he practiced optometry at Wilford Hall Air Force Base Hospital. One of his proudest moments in the Air Force was being part of the team of optometric professionals to provide eye care to the original Project Mercury astronauts. After leaving the USAF, Dr. Anderson established an optometry practice in downtown Mount Pleasant in 1964. The business thrived, growing to one of the largest providers of optometric care in Mid Michigan. Dr Anderson was instrumental in expanding the field of optometry by lobbying the State Legislature to authorize Doctors of Optometry to prescribe medicine for the eye. He was also an early advocate of soft contact lenses for his patients, and he participated in many foundational studies with the Dow/Corning Company in the development of advanced soft contact lenses. Fred was an active member of many organizations in the Mt Pleasant Community for the better part of his adult life. Fred was a member of the Lions Club, participated in the city’s planning commission, and was the local chairman of The United Way fund drive for many years. Fred was also an active member of The Century Club to raise funds for Central Michigan University Athletics. He provided eye care to many of CMU’s athletes and coaches over the years. Fred especially loved CMU Football and Basketball and was a fixture in the stands as a long time season ticket holder.  Fred was a well-known member of the Mount Pleasant Country Club, where he played and practiced at his life’s greatest passion, golf. He followed this passion in retirement to the TPC-Sawgrass Country Club in Ponte Vedra, Florida, where he met and fell in love with Barbara Martin. They remained close partners and companions through the end of his life. Fred is survived by his partner, Barbara Wilson Martin, and his children, Kim Anderson-Brindley (Dougal Brindley) and Eric Anderson (Bridgette Roberts), grandchildren, Margaret Gerber-Anderson, Hannah Anderson, Luke Brindley, John Brindley, Avery Anderson, Jillian Anderson, Parker Anderson, and Samuel Anderson, his ex-wife and mother of his children, Evalyn Ashmore and ex-wife Sarah Douglas. Fred was preceded in death by his parents George Anderson and Beatrice (Blair) Anderson, and three siblings Barbara Gillette, Arletta Groves, and Eugene Anderson. Fred’s memorial service will be held at 11 a.m. Friday, September 17, at Charles R. Lux Family Funeral home in Mt. Pleasant. The family will receive friends one hour prior to the service. Immediately following, all are invited to a luncheon in Lincoln Reception Center (attached to the funeral home). Fred’s ashes will be interred in Memorial Gardens Cemetery (also in Mt. Pleasant) immediately following the luncheon. To sign the online guest book or leave a condolence for the family please visit www.CharlesRLux.com.