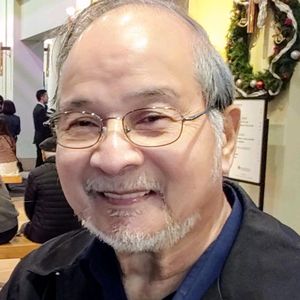 “One friend to miss, a friend has left”
We’re very sad & sorry to hear about his passing. We had the privilege of knowing him & blessed by his friendship, hospitality & generosity. Quick with a smile, jokes & laugh. He will forever missed. Our wonderful memories of our time together will be cherishedukelele class, watching hula performances, birthdays celebration, shopping good restaurant where to eat & most memorable we have with Eddie is celebrating our 50th...

It is sad Ding has left us, but he leaves behind fond memories of growing up with him as an older brother and in the same household. We come from a large family of 9 kids and me being the eighth, tells a lot about how we interacted with each other. Being one of his younger siblings, he took a lot of patience teaching me the chords on the ukulele and guitar and how to dance the salsa.

Ding was the mischievous one of all our four brothers. Our mom used to say that if ever she...

Some Thoughts above a Brother

A few days after Ding’s death, I was to preside over a meeting with my staff in the Department. One of the female members noticed the sadness in my face and asked me why. I said, “My older brother just died.” For some reasons, she then asked, “Were you close?” I simply said, “He is my brother.” That ended any further conversations that could progress to some unnecessary talks, at least, not at that time. Or maybe, I just wanted to be left alone...

The news of Duarding’s last days came as a shock to me. Can’t believe he is gone. He always was the spirited guy who would make everything possible. I would always say, he will be the last to go. Inspite of his heart ailments, life went as if he never had one.

Ding, I will always treasure my growing years because you were always there for me. You taught me how to play the guitar. You solved my little problems of “how to”. How I cried when you migrated for good.

I am the youngest sibling of Ding (our word of endearment for him) and because of this he often times made me his butt of jokes and he liked my friends too despite our 10 years in gap. In fact, my father trusted him in making him our chaperone in all the parties my sisters and I went not knowing he would leave us and go on his own date. Of course with the strict command from him that we just stayed in that house, dance the night away and wait until he arrived. He was aware of the curfew our...

I met Pilar through worship hula and then Eddie through our hula performances and also ballroom dancing parties.
He was always so kind and funny, a dear person and friend. Someday in heaven we will all meet again, with beautiful music and lots of dancing.

Ding was the third in the de la Fuente family. As a little kid, he was quite naughty as per our mama. One time lifesaver candy got lodged in his throat, luckily mama was around to help him through this ordeal.
He was a teaser especially to the 4 girls that came after him. When he saw us seated together, he would tell on us to mama. He used to get a kick out of it.
He was my dancing partner in my debut.
He was a weekly party goer without fail.
When he left for the States...

Eddie de la Fuente was a friend that became like family to us. In Hawaiian culture it is aikane becoming ohana! We met through Pilar's enrollment through my hula class at the Cerritos Senior Center. He would attend some of the lunches with spouses. But we got more involved when Pilar joined the worship hula group and we would have informal gatherings with husbands and wives. Then he got interested in playing the ukulele. So for the past year and a half to two years, in spite of the...

Eduardo de la Fuente went home to be with the Lord on Oct. 13, 2021, capping a nearly 79-year journey in which he visited many corners of the world and made an impression on those he met with his wit, wisdom and kindness.

He was known as Eddie to friends, or "Ding," a nickname used affectionately by family members.

Eddie was born in Manila, Philippines, the third of nine siblings. After graduating from De La Salle School and the University of Santo Tomas, Eddie made his way to the United States, settling in Chicago. It was there that he met Pilar Agudera, a fellow Philippine immigrant, and on Dec. 5, 1969, they began a marriage that would last more than 50 years.

Eddie and his family eventually moved to Southern California, where he worked for 20 years in chemical engineering while pursuing the passions that came to define his life: ballroom dancing, indulging in classical music and arts, playing the ukulele and especially traveling.

Together with Pilar, and sometimes with his children, Eddie stepped foot in more than 50 countries on six continents over a 30-year span. From China and Australia to Eastern Europe, from Israel and Egypt to South America, and countless other destinations in between, he relished visiting the world's great sites.

Eddie's charm helped him make great friends everywhere he went. His sometimes raunchy, always dry sense of humor made him the life of any party. But ultimately, he was a devoted family man who served as a beacon of wisdom and a steadying presence whenever needed.

While that presence will be missed, his family takes comfort in knowing how much he meant to so many.

A memorial service will be held Friday, Nov. 5, at Forest Lawn in Cypress, California. In lieu of flowers, donations can be made in Eddie's memory to either the American Heart Association or Make-A-Wish Greater Los Angeles.