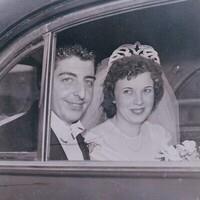 Diana and Ed, I am very sorry for your loss. After read his obituary, it appears he lived a good full life. My thoughts and prayers are with you and your family.

I will always remember his laugh and the fun we use to have in the shop along with Joe Afilani. Together they had so much fun telling me stories of the good old days. I miss both of them and the shop has never been the same since they turned in their keys.

Our thoughts remain with you and your family at this time. We are honored by the trust and confidence you have placed in us during this difficult time.
- The Staff of James J. Dougherty Funeral Home

Get email updates about Edward Dunbar Jr. delivered directly to your inbox.

Born and raised in Philadelphia, he attended Olney High School before joining the military. He was a Pfc during WWII who was awarded the Bronze Star and Purple Heart for his participation in the Campaign of Palau Islands. Upon his return he married his "peach cake" Helen H. Hussmann and opened Dunbar Brothers Flower Shop with his brother Bud in Olney.

Edward moved his family to Croydon PA in 1950 where he resided for 37 years. He was a member of Saint Thomas Aquinas Church and was a past Grand Knight of the Knight of Columbus.

He worked for Ambric Testing & Engineering as a soil & concrete engineer before retiring to Lakeland Florida where he was an active member of Ariana Village POA and the Sawdust Engineers, which he established. He was a member of the Lakeland Elks who were his lifeline after the passing of his beloved Helen. Edward always enjoyed woodworking, traveling and became a golfer during his time in Florida.

Most recently, Edward was a resident at Brookdale Senior Living Facility in Northampton PA where he again made some good friends. He had a great sense of humor and positive outlook which made him loved by all who met him.

There will be no memorial Service and a private burial will be held at Florida National Cemetery in Bushnell Florida in the near future. Memorial contributions may be made to your favorite charity.