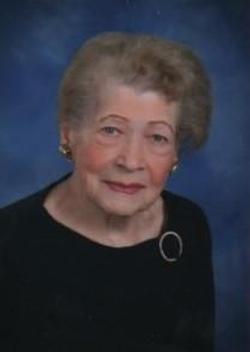 Betty was a dear friend and neighbor. She was an inspiration to all who knew and loved her.

Betty and I worked together many years ago and stayed in touch during Christmas. I am sorry to see she passed away. A very nice lady. RIP Betty.

Betty was a dear friend, neighbor and lovely kind lady. I will miss her all my life.
In Sympathy to all.
Love Donna Shambro

To Betty's Family,
Betty was my dearest dearest friend. We met a long time ago and have been friends for 80 years.We could go without seeing or talking to each other for months, or even a year, picking up right where we left off. Our last visit was very special in her home 2015, Rosemary had everything so nice. We held hands, laughed and talked about old times.
When we danced at Lincoln Turner Hall, our weekend trips to Fox Grove Lake. Betty stood up for me at my wedding, we...

MY SINCERE CONDOLENCES ,DRAW CLOSE TO GOD DURING THIS DIFFICULT TIME.(JAMES 4;8)

Get email updates about Elizabeth Gerstner delivered directly to your inbox.

Elizabeth “Betty” Louise (Cromey) Gerstner, beloved matriarch of four generations, died December 4, 2017, of natural causes at her home in Villa Park, Ill. Born December 2, 1917, in North Judson, Ind., one of six children to Frank Cromey and Theresa (Patzke) Cromey, Mrs. Gerstner grew up on a farm in Indiana, launched her career in Chicago, and made her life in Villa Park, where she and her husband Chester built their house in the 1950s.

In the six decades that followed, Mrs. Gerstner was an active parishioner at St. Alexander Catholic Church, an avid gardener, a talented hostess, a fabulous baker and cook, an accomplished bowler, a world traveler, and a beloved neighbor to generations of people who lived near her home. She worked as an office manager of a law firm into her 90s, and cared for many family members over the years.

Mrs. Gerstner was preceded in death by her husband, as well as her parents and her siblings: Joseph, John, Leonard, and Edward Cromey, and Alice (Cromey) Gundling. She is survived by her beloved children, John W. (Mary Anne) Gerstner and Teresa L. (Philip) Therrien; her cherished grandchildren Rosemary L. (Jack Silverstein) Gerstner and John W. Gerstner, Jr.; and her great-granddaughter Tiernan R. Silverstein. She also had numerous nieces and nephews, and grand-nieces and grand-nephews. Mrs. Gerstner was known for her thoughtfulness and strong work ethic. On Saturday, December 2, 2017, she celebrated her 100th birthday, surrounded by family.