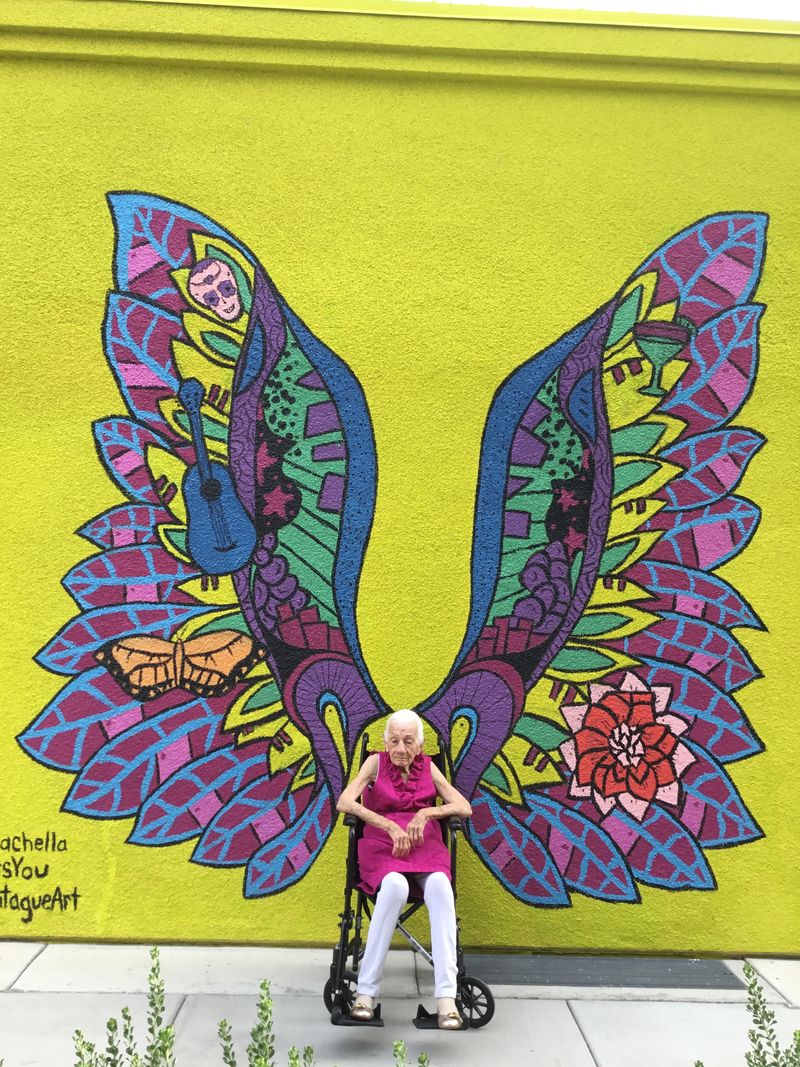 She was a wonderful lady. Always loving and caring never a word of any discomfort. Happy go lucky lady. Made a difference in lives. To see someone so content always smiling saying hi, to everyone. And the I love you's were wonderful to me.

Susie, Jacinto, Jesse & Dora Thoughts and prayers are with you.

With deep sorrow we would like to express our sincere confidences to all her family members. May Gods light guide you throught this difficult time.

She was an absolutely lovely lady and will be greatly missed. Her sense of humor and fun personalities went well with those of my mother, who got to enjoy her company in the many years since she joined the Coachella Senior Center. God has given her the wings as she is shown on the gallery photo... now she will be up there looking over all her loved ones.

Sra. Enedina was loved by many and will be greatly missed by many... My daughters and I had the great honor of being welcomed into her family and I will forever cherish her wisdom and memories...
Jacinto, Jesse, Martha, Elsa, Susie, Dora and the Grand, Great Grand, and Great Great Grandchildren, you all are in my Prayers...

Nana you will be missed love you always in my heart ❤

Our deepest condolences to you all our prayers are with you

Enedina Celiz Rapan, 93, born on August 4, 1926, in Manzanillo, Colima, Mexico, passed away January 9, 2020. She resided in Coachella, CA at the time of her passing. Enedina was healthy and vibrant woman and her body's age simply caught up to her. Arrangements are under the direction of Forest Lawn, Coachella, California.

She was preceeded in death by husband Jacinto Rondolos Rapan, daughter Judy Zepeda and son Ruben Gutierrez. She was a nurse in Mexico in her youth then a dietician in Arizona and in California with Campesinos Unidos Child Care Center and at the Coachella Senior Center for many years. Dedicated to making sure every senior citizen in Coachella enjoyed a delicious and healthy meal she started serving a weekly lunch at Bagdouma Park and later lead the group of Coachella residents, mayor and council members to Sacramento to secure funding for the building that is now the Coachella Senior Center. Prepared and served meals, managed the front office, served as treasurer for the Lotería games group that raised funds for out of town trips for the seniors and was crowned their Queen and represented the center in every parade she could participate in. Volunteering and outreach work were her favorite and made her most happy. Among many accolades she received the Coachella Valley's Senior Inspiration Award for the City of Coachella in 2003 and was very proud that her decades of volunteering were recognized by this organization. Other non profit organizations like FIND, Food In Meed of Distribution, Migrant Parents Association, the Braille Institute, Filipino American Society of the Coachella Valley and others enjoyed her dedication. In 2018 Coachella Mayor Hernandez presented Enedina as Hometown Hero Community Activist, Hometown Hero Inspirational Community Mentor. In 2013 Enedina traveled to Washington D.C. leaders of Líderes Campesinas where the National Domestic Workers Alliance recognized her dedication to communities in need.

Enedina and Jacinto lead their farm laboring family following the grape harvest from Yuma, Arizona to the fruitful Central Valley in California. A tireless advocate for human rights, Enedina worked with the UFW-United Farm Workers, Cesar Chavez, Líderes Campesinas alongside Milly Treviño and other organizations to promote awareness of basic human rights, teach English, assist with legal and legalization processes and other basic skills to those in need. Husband Jacinto, Family and she were active with the UFW in the 60-70's and from the late 80's up until one and a half years ago was still hosting meetings in her home for Líderes Campesinas and entertaining them with her experiences, wit and jokes!

Since their move from Somerton, AZ to the Coachella Valley in 1974 the Rapan Family became active members of Our Lady of Soledad Parish where she served as a lector, chatechism teacher, youth group leader and leader in the Guadalupanas group as she was a devoted prayer of the rosary and up to one year ago attended the weekly Monday rosary and mass at Our Lady Of Soledad Church.
A woman of Great and unwavering faith her multi generation family was at her side and surrounded her with songs of her youth, and of faith and prayer as she took her last breath and peacefully went to sleep in to God' s loving hands. A beautiful woman inside and out she will be greatly missed.