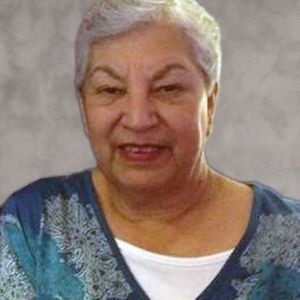 Ernestina was born in Winslow, Arizona to Leocadio and Maria Villarino on December 10th 1938. She was the youngest of 6 sisters and had 5 brothers. At the age of 18, she moved to Coachella, Ca. where she met and later married Aniceto T. Mendoza in March of 1957 by the Justice of the Peace, and they were later remarried by the Church of Our Lady of Soledad in Coachella, Ca in April of 1970. Ernestina was widowed in June of 1970, leaving her with 4 small children and expecting her fifth. Ernestina worked several jobs to support her family in various retail positions finally retiring from PGA West as a security officer in 2010.

Memorial service will be held on July 18, 2021 from 4 – 8 PM at Forest Lawn Mortuary in Coachella, Ca, with the Memorial Mass being celebrated at Our Lady of Soledad Church on July19, 2021 at 10AM.