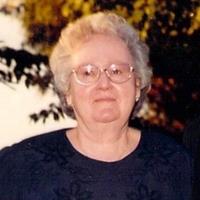 Thank you for your warm heart Aunt Esther! Love to you Tammy

Sending my deepest condolences to the family. Esther was such a joy to work with at Dining Services. She was very patient teaching me the food and supply purchasing protocol. Esther was always very dedicated and always had a kind word for everyone, I am honored to know her. Prayers for the family.

Get email updates about Esther Baker delivered directly to your inbox.

Esther graduated from St. Joseph Central High school in 1951.  She married Robert Baker in 1954, her lifelong partner of 67 years.

Together Esther and Robert raised their family in St. Joseph, and she worked for Heartland Health System over 21 years.

She was preceded in death by her parents.

A private graveside interment will be held at Memorial Park Cemetery.