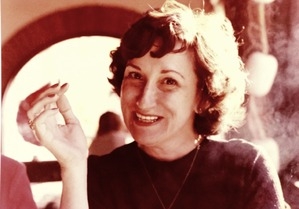 Forever in Our Hearts

So sorry for your loss I did know Frances went camping with the family always a very loving and caring woman and a lot of fun. She will truly be missed.

sincere sympathy to all your family in your deep loss.

Kerry and family, I'm so sorry for your loss. May you be surrounded by the love of family and friends as you navigate this challenging time. May fond memories give you comfort. Sending prayers and blessings -

Kerry and Family-Thinking of you and sending prayers! Kerry-Now I know where all your determination comes from!!

Just read in the Daily Breeze that your mom passed away. Although I never met your mom, I Just wanted to offer my condolences. May your mom´s memory be a blessing. Sending love and hugs to you and your family.

I never got to meet Francis, however, my Mom, Oletta Hawkins Richardson spoke of her often when I was a teenager. I kept in touch with her through FB over the years. Prayers and love for the family.

Frances C. Welch, 85, of Rolling Hills Estates, CA passed away on November 9 at her home in the loving embrace of her family. Born in Bentonville, Arkansas on July 18, 1936, she had lived in Southern California since 1958.

Frances was the daughter of Carl and Beulah Woodruff and grew up in Arkansas along with her sister Carol Manker. Frances' father moved the family to the Los Angeles area when she was only 16 and she pined for the handsome and talented young man that she left behind, Kermit Lee Welch of Fort Smith Arkansas. After pining for him and carrying on a long distance courtship, she returned to Arkansas where she married Kermit. Their marriage spanned 68 years. She supported Kermit while he finished college and raised her firstborn daughter, Kerry Lee. After their son, Carl William, was born, Frances and Kermit moved to California in 1958 where she gave birth to Leslie Susan and Merry Ann.

Once Frances' youngest daughter started kindergarten, Frances started attending college. She fell in love with languages, studied Spanish and French and received a degree in Linguistics with Honors from CSUDH in 1971. After graduation, she taught Spanish and French at South Gate Middle School, moving over to teach ESL and eventually became the Bilingual Coordinator and she served in that position for over 19 years.

Frances continued her education and received a Master's Degree from the University of San Francisco in multicultural education and a bilingual-cross-cultural specialist credential in 1979. She constantly strove to perfect her Spanish and in 1978 she attended a Spanish program in Mazatlan. She also studied at Berlitz language school. In what she considered the favorite trip of a lifetime, she attended a summer Spanish immersion program in Madrid, Spain, leaving Kermit and the dog at home.

Ardent adventurers, Frances and Kermit camped often and undertook memorable travels including road-trips to Mexico City, a self-drive boat cruise on the Thames River, driving trips in Ireland, Italy and many road trips across the United States, visiting 49 states in total.

She also backpacked down the Grand Canyon twice, crying on the descent overcoming her fear of heights.

Through her last hours, Frances exercised a wry, sassy wit that charmed and beguiled her friends and family. She was a doting grandmother and great grandmother. She cherished personal relationships with every one of her eight grandchildren. She supported their education, helped them study for firefighter exams, funded music lessons, tutored Spanish, and attended their sports games and music concerts. In the past eight years, her great grandchildren became her raison d'etre. She was delighted to visit and spoil her beloved "greats." Her home remains covered with their pictures and artwork. When asked which one of her grandchildren or great-grandchildren were her favorite, Frances would always quip "whichever one I'm with."

Frances loved exploring family history and through scholarly research wrote a biography about her uncle Vernon Woodruff's service in WWII. She also authored her own autobiography and enjoyed connecting with newly discovered or connected family members through Ancestry.com.

Kermit has always been the center of Frances' life. Together they created a beautiful home that served as a nexus of gatherings for friends and family. She was his original groupie sharing his love of music and attending hundreds of his performances. She also joined him in his music business and his success was often due to her savviness and intelligence.