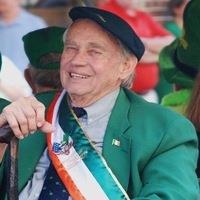 I was out-of-town the week he died and wasn't aware of it until a Blessed Sacrament parishioner told me two days ago. I knew Mr. Clair from visiting my mother who lived down the street at 19 Regis Court. He spoke highly of mom and was genuinely saddened by her death in 2014.

I saw him occasionally if I was in his neighborhood, but always took the time to greet him if he was attending a Mass where I cantored or the choir was singing. I always went up to him and asked to shake a...

Alicia & Marcie,
So sorry to hear of the passing of your Dad Bevo. So sorry that Lisa & I were not able to be with you to say good-bye to your Father. I have so many wonderful memories of him from childhood, throughout life, until to just recently...I can not count. He was one of my favorite people on this planet.

We are all missing his huge smile & laugh, endless stories, and outrageous Irish spirit. Your Mom is giving him good-natured grief with the Saints in...

Alicia & Marcy
Your Dad and I go back to grammar school days in downtown Charleston...So sorry to be losing him. Your Dad was the kind of man you couldn't help but to love. You've had so much sorrow lately but try to find a little light in
knowing that they all together again watching over and praying for you.
Unfortunately, I will not be able to be in Charleston with you this weekend due to previous committment here in Columbia. But I will be with you in heart and in...

I only met your father a few times and he was always so cheerful! Never met a stranger. I was sorry to hear of his passing.

So very sorry for your dear loss. My thoughts and prayers are with each of you.

I was sorry to learn of Mr. Clair's death. He always had a smile and greeting. May God help you through this difficult time.

To Alicia and family,
I am sorry to hear of the loss of your father.I hope that all of your memories comfort you through these times.All of you are in my thoughts and prayers.God bless.

May Francis's joy in life continue to be felt by all. He loved his friends dearly and loved telling stories of his rich memories. God Bless the entire family and may you remember the good times and fun that Francis eluded. John Tezza

Get email updates about Francis Clair delivered directly to your inbox.

Francis Parker Clair, 83, widower of Artes Welcker Clair, entered into eternal rest on December 2, 2019.  The relatives and friends of Mr. Francis P. Clair are invited to attend his Mass of Christian Burial to be celebrated at 11:30 AM, Saturday, December 7, 2019, at Blessed Sacrament Catholic Church, 5 St. Teresa Dr, Charleston.  The Rite of Committal will follow at Holy Cross Cemetery.  The family will receive friends between 4:00 and 7:00 PM Friday evening at the James A. McAlister Funeral Home, 1620 Savannah Hwy. The Rosary will be recited at 6:30 PM.

Francis was born on September 24, 1936, in Charleston, a son of Elma Elizabeth Parker and Laurence Aloysius Clair. He began his career with Claussen's Bakery Company and then went on to a thirty-year career with ExxonMobil until his retirement in 1992.

Francis lived for his family and all things Irish. He spent the last years of his retirement entertaining friends old and new from his front porch surrounded by the many flags from his favorite teams. Francis was a fan of all South Carolina teams but his first love was the Fighting Irish of Notre Dame. He loved spending time with his children, grandchildren and great grandchildren who all lovingly called him Pappy. Francis loved to reminisce about his glory days playing Basketball, Baseball and Football for his Alma Mater, Bishop England High School, where he was inducted into the Athletic Hall of Fame. He was also very proud of his College Basketball career under the tutelage of Coach Al Maguire at Belmont Abbey College, where he is also a member of the Hall of Fame.

As member of the Irish Society and the Ancient Order of the Hibernian he celebrated his Catholic Faith and his Irish Heritage. Francis was always present at the annual St. Patrick's Day parade sitting beside one of his dearest friends Bernard Mclaughlin. He was also a member of the Elks Club and the Knights of Columbus. Francis enjoyed his retirement years playing golf and traveling with his wife and many friends from The Club.