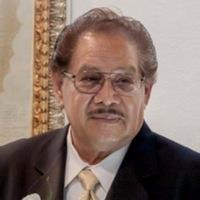 George, you were the best! You loved & protected my sister, Jackie, my nephew & nieces, Cesar, Christine & Carol, and you did so so graciously. Words cannot express how much respect I have for you being the loving husband my sister needed & deserved & you did so for 58 years. You are the love of my sister’s life & she will cherish your memory until one day when you see each other. R.I.P.
knowing that you left my sister, Cesar, Christine & Carol in a good...

Sending my heartfelt condolences. My dad will never be forgotten...

Uncle George, although I didn't have the pleasure of living near you and spending as much time together as I would have liked, I always knew that my aunt and cousins were in good, loving hands. The times we did get to spend together were special because you either came to Texas with the family or we went out to see you all, most recently in 2016. Your love for your family was always plain to see. Those dear memories and many others will be forever treasured by us all and will bring us warmth...

Dad, you've earned your angel wings. You will forever be in my heart and my childhood is filled with loving memories of you. I hope my little brother, George Lee, was there to welcome you to Heaven. God Bless you and may you Rest In Eternal Peace.
Love, Gloria Diane Aguilar Schatz

My sweet Uncle with a heart of gold and a perfect sense of humor. Im glad we had the chance to reconnect. This life we live is crazy! I have 7 guardian angels watching over me now. Please watch over me. Im grateful to have the opportunity to connect with you again. I love you Uncle. Enjoy the heavenly sunshine. You will be truly missed.
Your youngest niece Tina ♡

Get email updates about George Aguilar delivered directly to your inbox.

The Lord called George to rest on October 5, 2020. George was born on May 24,1932 in Knightsen, California. He graduated from Brentwood Liberty Union High School in 1951. As a young teenager, George worked at the neighborhood market in Knightsen. He then briefly worked at the U.S. Steel Mill before he enlisted in the U.S Navy and proudly served our country during the U.S. Korean War (1952-1956). He was a brave and patriotic sailor who received an honorable discharge. He often reflected and spoke of fond memories of traveling the world by sea that provided him a wealth of knowledge. Alongside his beloved wife, Jackie, he enjoyed listening to variety of music, taking a Sunday afternoon drive, or a boat ride along the Delta. Most of the time, you could find him sitting at the riverfront peacefully watching the waves roll in while catching the sunset. Any holiday was his favorite time of year as he admired the spirit of the season, but more particularly, the annual pumpkin carving and Christmas light display. He always made time to watch black and white movies with family. The annual State Fair was another one of his all-time favorites. He treasured the old times spent with the family at Fisherman’s Wharf and sincerely enjoyed himself at the infamous San Francisco’s Playland at the Beach. He was an avid Giants fan and, as you may know, won many dance competitions with his wife, Jackie. For almost six decades, George adored and cherished his wife, Jackie, and undeniably devoted his life to making her happy, every day. In fact, after serving in the military, and retired from the Fiberboard, he fulfilled Jackie’s life-long dream, and together, they owned and operated Las Palmas Restaurant, well-known to many in the community for good food, good music, good friends and many good laughs making beautiful memories along the way. Surely, he will be deeply missed by many.

George will forever remain in our hearts and be remembered for his kind mannerism, gentle soul and witty sense of humor. His family will remember him as a wonderful husband, a dedicated father and true friend to the end of time, a person who lived a life so beautiful and full.

May he rest in peace until we meet again...

On Friday, October 30, 2020, the Rosary will be recited at 9:30 a.m. at Pittsburg Funeral Chapel, to be followed by requiem Mass at 11:00 a.m. at the Holy Rosary Catholic Church in Antioch. Interment will be at the Holy Cross Cemetery, Antioch, California. Following with a gathering at the Veteran’s Memorial Park in Brentwood.