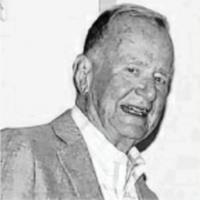 Get email updates about George Midwood III delivered directly to your inbox.

George was born in Greenfield, Massachusetts on February 13, 1934, the son of George and Lucille MacAllister Midwood. His familymoved shortly thereafter to Nayatt Point, Barrington, Rhode Island. He developed a love for golf early, capturing the Rhode Island Country Club junior club championship. While golf remained his passion throughout his life, his capacity with finance led to his education and illustrious career.

He graduated from Brown University in 1956 and entered the U.S. Army, where he served for two years as a counterintelligence analyst,then returned to civilian life for his doctorate studies at Tufts University’s The Fletcher School of Law and Diplomacy. He left Fletcher before completing his thesis when he was offered an executive position at Exxon, where he rose through the executive ranks, living in Hong Kong, Malaysia, India and Pakistan, to the position of Comptroller. Those years served to foster his love for languages, and he became a competent speaker in German, Japanese, French and Russian. George’s years at Exxon won him a reputation in American industry as a uniquely talented financial executive, and in 1979, at age 45, he joined American Cyanamid as Treasurer. In 1987 he was signed as Treasurer andExecutive Vice President by RJR Nabisco, where he presided over what was the largest leveraged buyout in U.S. corporate history. RJR brought George to Atlanta, and that's where he met the love of his life, Beverly.

They were married in 1993 and moved into their home in Sandy Springs’ Huntcliff neighborhood, at the entrance to Cherokee Country Club, where George played out his days of golf, and where he and Beverly formed so many enduring friendships. In addition to golf, George loved to fish, ski and travel. He and Beverly travelled the world.

George is survived by his most loving and devoted wife Beverly; his son Andrew Midwood and wife Sara and their sons Mattox andWeston; stepdaughter Jennifer and her husband Scott Giacobbe, and their sons Dean, Cole and Rese; nephews and nieces Robert Egan, Jr., George Egan, Emily Thomas, and Sarah Hebert; and his beloved poodle Lucy. And by his many Cherokee golf buddies who will remember him for his sharp wit, his generous smile and his devastating short game.

The family suggests remembrances to The Salvation Army in memory of George A. Midwood.