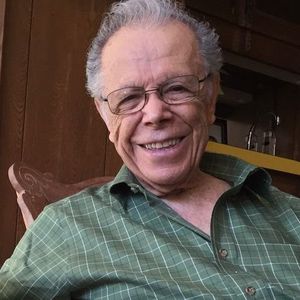 George Ohanian, age 96, passed away on Tuesday, April 20, 2021 in the comfort of his home in Glendale, CA. Born and raised in Hartford, CT, George was a combat veteran of World War II and fought in the European Theatre and the pivotal Battle of the Bulge. He served in the Sixth Army and his battle unit was the 569th Anti-Aircraft Artillery. After the war, he relocated to California with his mother and sister and graduated from UCLA in 1952 with a Bachelor of Arts degree in English. During his last year of college, George began what would become a successful 38-year career in the entertainment industry when he was employed by Universal Studios as a helper in the Still Department. He was soon promoted to printing publicity photos of the stars and then transferred to the Editorial Department as an Apprentice Film Editor. He fell in love with the craft of editing and one of his earliest credits was as Lead Sound Effects Editor on the television comedy, "The Munsters." He was thrilled to be promoted to Film Editor and worked on many iconic series over the years, including, "The Six Million Dollar Man," "The Bionic Woman," "The Incredible Hulk," and "Matlock." George was also very proud to have worked, earlier on in his career, with Orson Welles as Dialogue Editor on the classic film, "Touch of Evil." He retired in 1989, but remained active as a lifelong member of the American Cinema Editors (A.C.E.), and was also a member of the Motion Picture Editors Guild (Local 776), the Academy of Television Arts and Sciences, and the American Film Institute. In addition to being a lifelong fitness enthusiast, he enjoyed taking road trips, doing crossword puzzles, watching college football games (especially his Bruins) and visiting with his children and grandchildren. George is survived by his beloved wife of 46 years, Eileen Stecyk Ohanian; three daughters, Heather (Scott) Whitbeck, Tamara (Josh) Harker, and Jennifer (Brian) Fink; five grandchildren Nicholas, Ashlyn and Lily Whitbeck, and Theodore and Felix Fink; and his sister Gladys (late George) Danielson. Funeral services will be held on Friday, May 21, 2021 at 10AM at Forest Lawn Hollywood Hills. Donations in his memory may be made to Veterans of Foreign Wars at www.heroes.vfw.org.

I believe George was the first editor I ever worked with, and certainly one of the most fun. He was a teacher and friend, and taught me the skill of rewinding a take on the end of a moviola without cutting my hand to pieces - something that won me cred with other editors until the business went digital. More importantly, George taught me how to find the rhythm of a scene, how to place underscore against it, and how to get the very best of an actor's performance; he was a master of his craft,...

I'll always remember George for his gentlemanly ways.
When I finished my work at Universal, George invited me to the studio commissary for lunch. After lunch we went to his editing room and finally to a theater where one of his shows was being viewed.