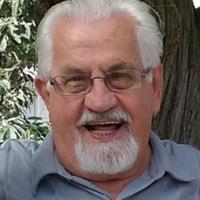 In loving memory of a wonderful person. we were fortunate to have had them as a neighbor for many years.

Get email updates about Gerald Dickinson delivered directly to your inbox.

Gerald W. Dickinson, 83, of East China Township, formerly of Zion, IL, entered eternal life on Thursday, April 8, 2021 after a short illness. He was born on October 21, 1937 in Marine City, MI to the late David L. and Virneta (Deutch) Dickinson.

Gerald served his country honorably in the U.S. Navy for 20 years ranked Chief Petty Officer signalman. After his service, he held careers at the Johnson Outboard Motor Company, and then Nosco Printing, both of Illinois, until his retirement. During this time, he was married to his late wife Jaquelyn nee Lambert for 35 years.

He married Elizabeth Ann (Breiter) Miller on October 6, 2001, and they enjoyed 20 years of marriage. Gerald was an avid reader, a woodworker, and was proficient in his garden. He made really great pancakes and was known for his recipe for baked beans, which he passed on to his children before he left this earth. He was a member of Grace Bible Church of St. Clair, MI. His firm faith in the Lord Jesus Christ helped him to overcome obstacles in life and health issues, and gave him peace before the Lord called him to his heavenly home.

Burial will be in Great Lakes National Cemetery, Holly. Arrangements were made by Bower-Rose Funeral Home. To send condolences, visit: www.bowerrosefuneralhome.com.